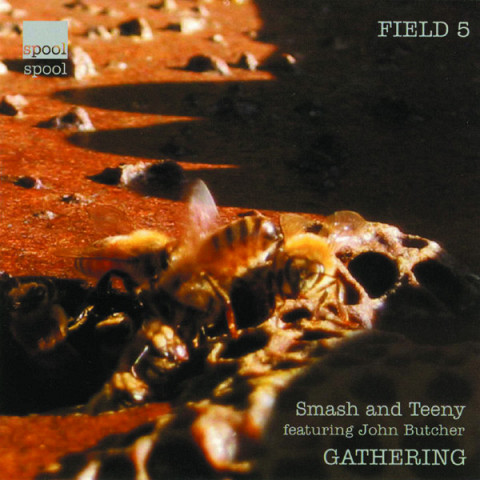 Composer Sarah Peebles is active as a performer of computer assisted music, often in unconventional settings such as temples and parks, in the ensembles Smash and Teeney (with Nilan Perera on prepared electric guitar) and Cinnamon Sphere (with Perera and calligrapher Chung Gong). She is also the host of Toronto radio station CIUT’s Audible Woman. She has spent extended periods studying in Japan, learning its classical and contemporary music and collaborating with Japanese artists. Three recent CDs show different aspects of Peebles’ exotic explorations. […] Gathering is a two-CD offering of the duo known as Smash and Teeny (Sarah Peebles on laptop and de-tuned shô, Nilan Perera on prepared electric guitar). The first CD features a “best of” Smash and Teeny, 2001-2003, performing in the U.S. and Canada. On the second CD, they are joined in a studio by the sound explorations of saxophonist John Butcher. And on a 1999 video segment, Cinnamon Sphere (Peebles, Perera and calligrapher Chung Gong) performs Kalador Kodex, in a farm field. Gong applies his thick Korean brush and black ink to canvases standing in the open airto the live accompaniment of Smash and Teeney and the nearby lowing of cows.

Together, Peebles and Perera improvise magical textures. Peebles’sustained, languorously unfolding washes and drones serve as a cushion overwhich Perera coaxes out unlikely, ethereal timbres. He prepares his instrument with inserted plastic drinking straws, paper clips, and metal brushes and places it across his lap. Then in a spirit of discovery, he delicately bows, strokes, and plucks it.

The voice of Peebles’ beloved insect realm is again heard in this collection. Stridulation Nation uses the high-pitched, excited buzz of (1 believe) a beehive, first as a gentle underpinning of sound, and then building, with the slow but relentless pace of a jet plane grinding to a halt, to a strident insistency. Puzzling titles like Ox Tendon Enigma or Table Setting for Snow reflect the through-the-looking-glass æsthetic this duo practices.

On the second CD, the duo’s sound is nicely complemented by the multiphonics, growling and flutter-tonguing of London saxophonist John Butcher. A leading figure in free improvisation, his presence adds another layer of depth to their rattle and hum.