… these soundscapes are notable for their subtle mixture of foreground and background. — The WholeNote, Canada 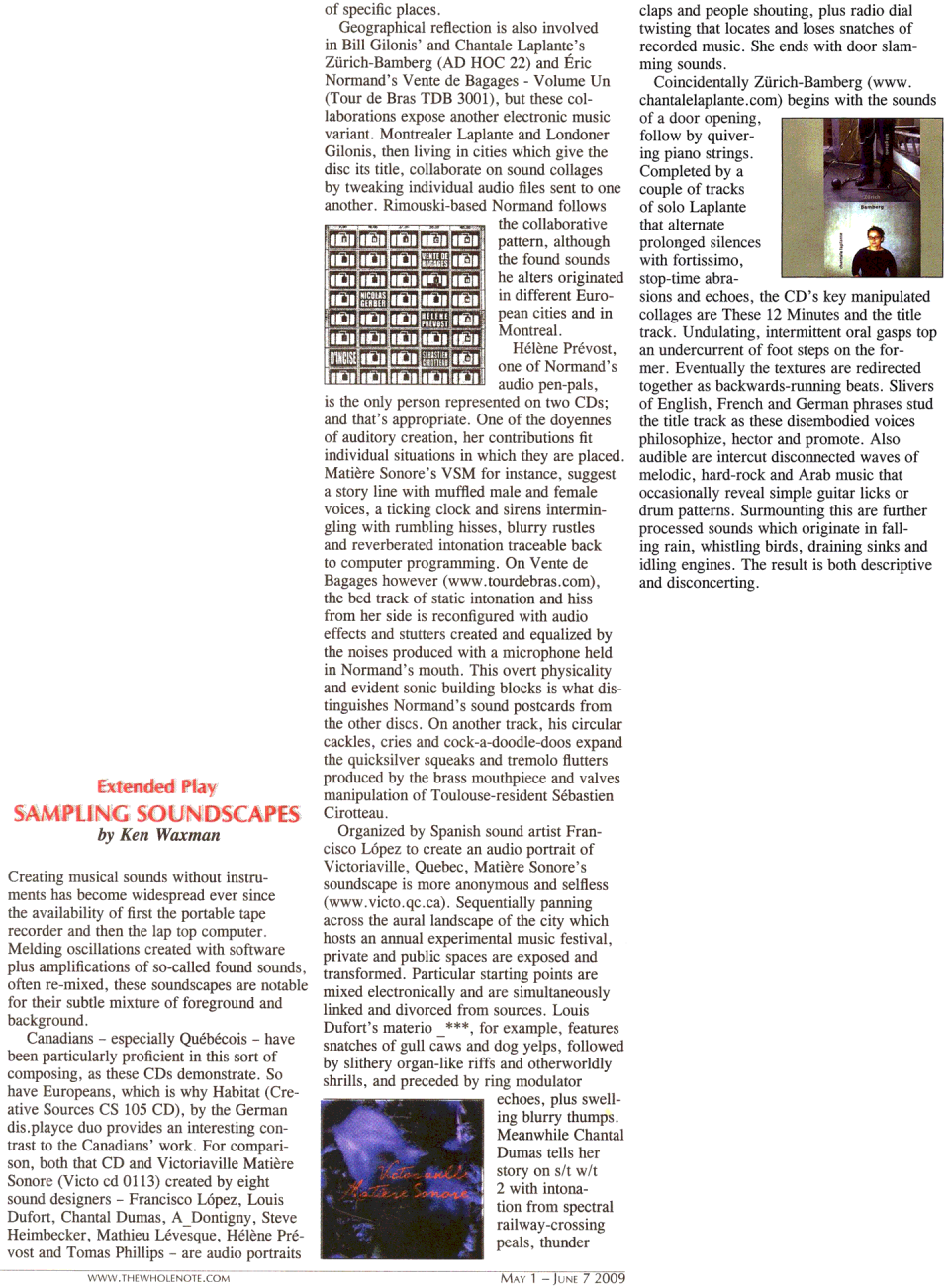 Creating musical sounds without instruments has become widespread ever since the availability of first the portable tape recorder and then the lap top computer. Melding oscillations created with software plus amplifications of so-called found sounds, often re-mixed, these soundscapes are notable for their subtle mixture of foreground and background.

Canadians — especially Québécois — have been particularly proficient in this sort of composing, as these CDs demonstrate. So have Europeans, which is why Habitat (Creative Sources CS 105 CD), by the German dis.playce duo provides an interesting contrast to the Canadians’ work. For comparison, both that CD and Victoriaville matière sonore (Victo cd 0113) created by eight sound designers — Francisco López, Louis Dufort, Chantal Dumas, A_Dontigny, Steve Heimbecker, Mathieu Lévesque, Hélène Prévost and Tomas Phillips — are audio portraits of specific places.

Geographical reflection is also involved in Bill Gilonis’ and Chantale Laplante’s Zürich-Bamberg (AD HOC 22) and Éric Normand’s Vente de bagages — Volume un (Tour de Bras TDB 3001), but these collaborations expose another electronic music variant. Montréaler Laplante and Londoner Gilonis, then living in cities which give the disc its title, collaborate on sound collages by tweaking individual audio files sent to one another. Rimouski-based Normand follows the collaborative pattern, although the found sounds he alters originated in different European cities and in Montréal.

Hélène Prévost, one of Normand’s audio pen-pals, is the only person represented on two CDs; and that’s appropriate. One of the doyennes of auditory creation, her contributions fit individual situations in which they are placed. Matière sonore’s VSM for instance, suggest a story line with muffled male and female voices, a ticking clock and sirens intermingling with rumbling hisses, blurry rustles and reverberated intonation traceable back to computer programming.

On Vente de bagages however (www.tourdebras.com), the bed track of static intonation and hiss from her side is reconfigured with audio effects and stutters created and equalized by the noises produced with a microphone held in Normand’s mouth. This overt physicality and evident sonic building blocks is what distinguishes Normand’s sound postcards from the other discs. On another track, his circular cackles, cries and cock-a-doodle-doos expand the quicksilver squeaks and tremolo flutters produced by the brass mouthpiece and valves manipulation of Toulouse-resident Sébastien Cirotteau.

Coincidentally Zürich-Bamberg (www.chantalelaplante.com) begins with the sounds of a door opening, follow by quivering piano strings. Completed by a couple of tracks of solo Laplante that alternate prolonged silences with fortissimo, stop-time abrasions and echoes, the CD’s key manipulated collages are These 12 Minutes and the title track. Undulating, intermittent oral gasps top an undercurrent of foot steps on the former. Eventually the textures are redirected together as backwards-running beats. Slivers of English, French and German phrases stud the title track as these disembodied voices philosophize, hector and promote. Also audible are intercut disconnected waves of melodic, hard-rock and Arab music that occasionally reveal simple guitar licks or drum patterns. Surmounting this are further processed sounds which originate in falling rain, whistling birds, draining sinks and idling engines. The result is both descriptive and disconcerting.

… these soundscapes are notable for their subtle mixture of foreground and background.