Each of these pieces possesses the ability to transport the listener to somewhere beyond the concrete… — The Sound Projector, RU 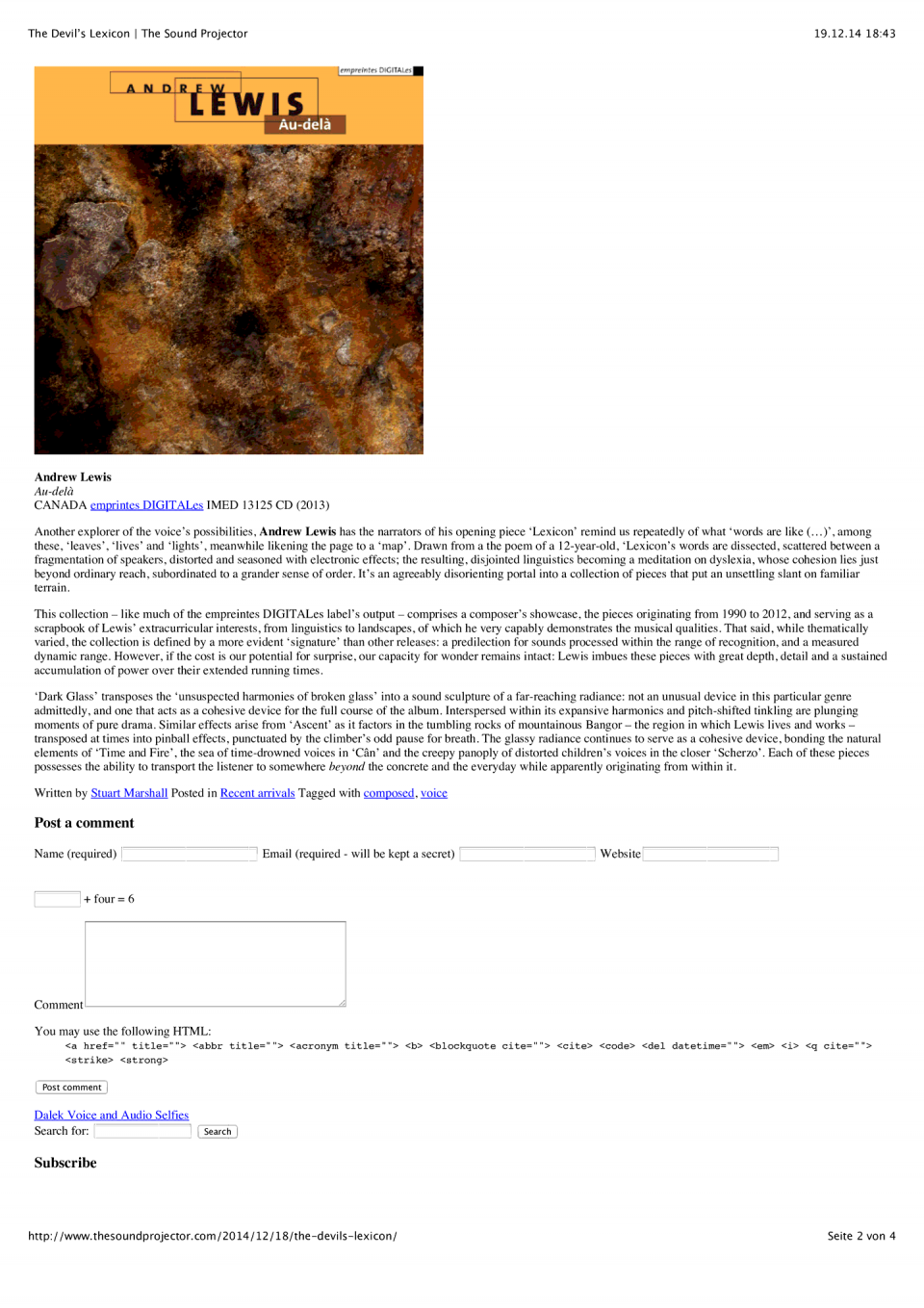 Another explorer of the voice’s possibilities, Andrew Lewis has the narrators of his opening piece Lexicon remind us repeatedly of what ‘words are like (…)’, among these, ‘leaves’, ‘lives’ and ‘lights’, meanwhile likening the page to a ‘map’. Drawn from a the poem of a 12-year old, Lexicon’s words are dissected, scattered between a fragmentation of speakers, distorted and seasoned with electronic effects; the resulting, disjointed linguistics becoming a meditation on dyslexia, whose cohesion lies just beyond ordinary reach, subordinated to a grander sense of order. It’s an agreeably disorienting portal into a collection of pieces that put an unsettling slant on familiar terrain.

This collection – like much of the empreintes DIGITALes label’s output – comprises a composer’s showcase, the pieces originating from 1990 to 2012, and serving as a scrapbook of Lewis’ extracurricular interests, from linguistics to landscapes, of which he very capably demonstrates the musical qualities. That said, while thematically varied, the collection is defined by a more evident ‘signature’ than other releases: a predilection for sounds processed within the range of recognition, and a measured dynamic range. However, if the cost is our potential for surprise, our capacity for wonder remains intact: Lewis imbues these pieces with great depth, detail and a sustained accumulation of power over their extended running times.

Dark Glass transposes the ‘unsuspected harmonies of broken glass’ into a sound sculpture of a far-reaching radiance: not an unusual device in this particular genre admittedly, and one that acts as a cohesive device for the full course of the album. Interspersed within its expansive harmonics and pitch-shifted tinkling are plunging moments of pure drama. Similar effects arise from Ascent as it factors in the tumbling rocks of mountainous Bangor – the region in which Lewis lives and works – transposed at times into pinball effects, punctuated by the climber’s odd pause for breath. The glassy radiance continues to serve as a cohesive device, bonding the natural elements of Time and Fire, the sea of time-drowned voices in Cân and the creepy panoply of distorted children’s voices in the closer Scherzo.

Each of these pieces possesses the ability to transport the listener to somewhere beyond the concrete and the everyday while apparently originating from within it. 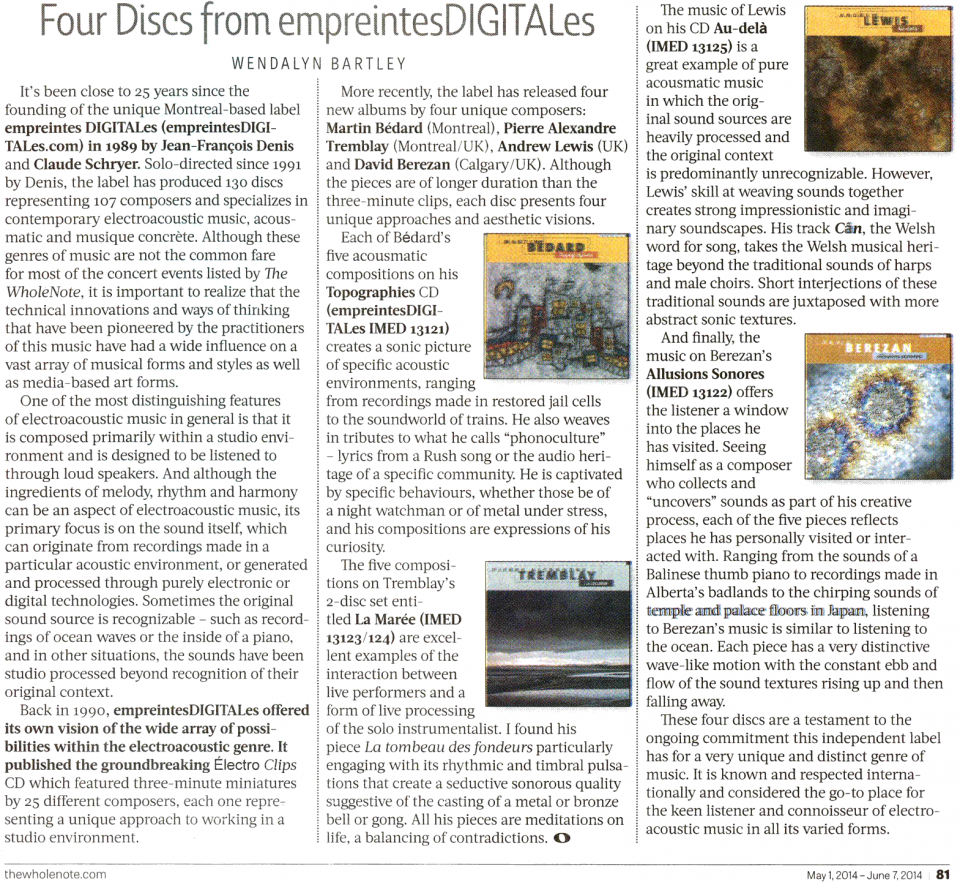 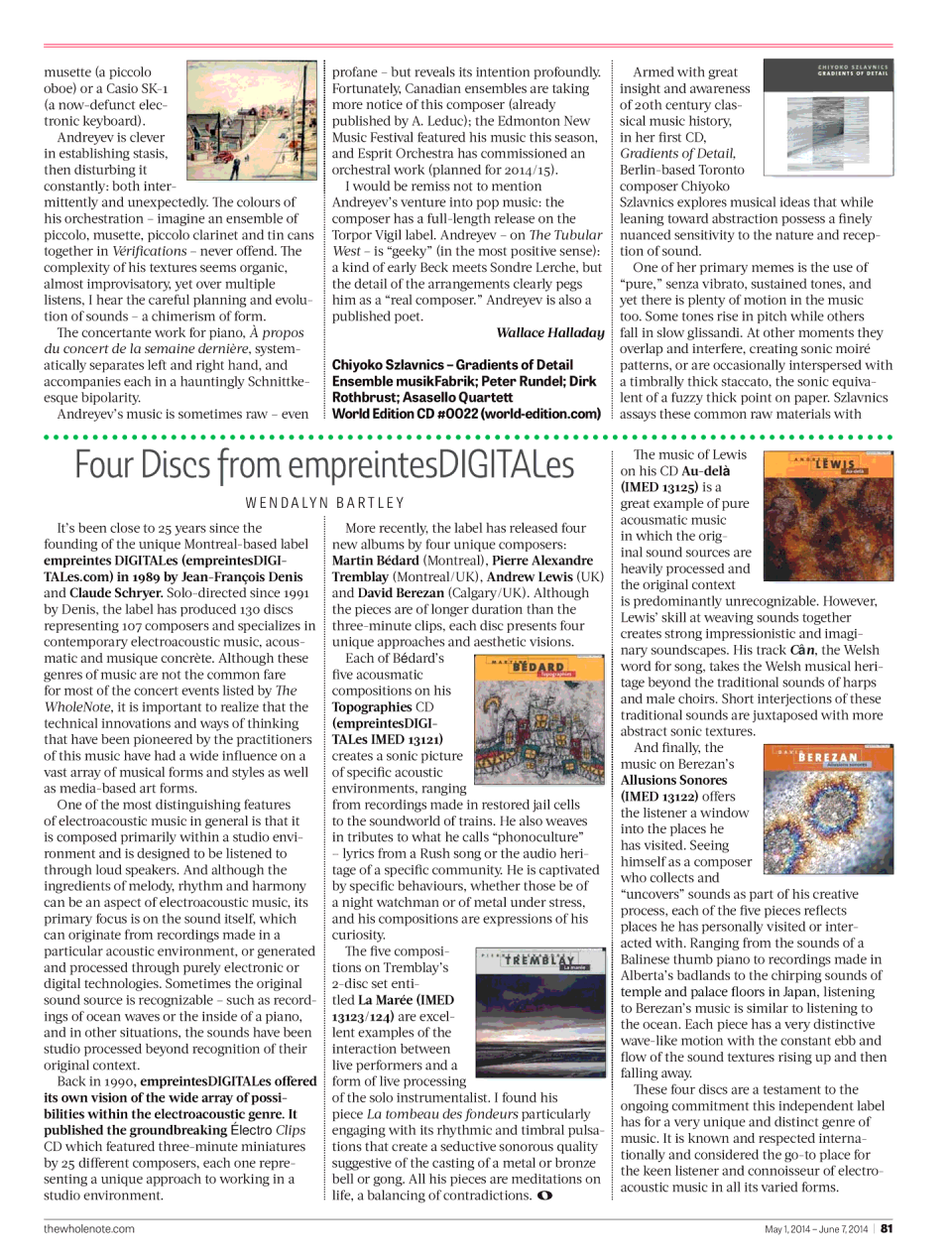 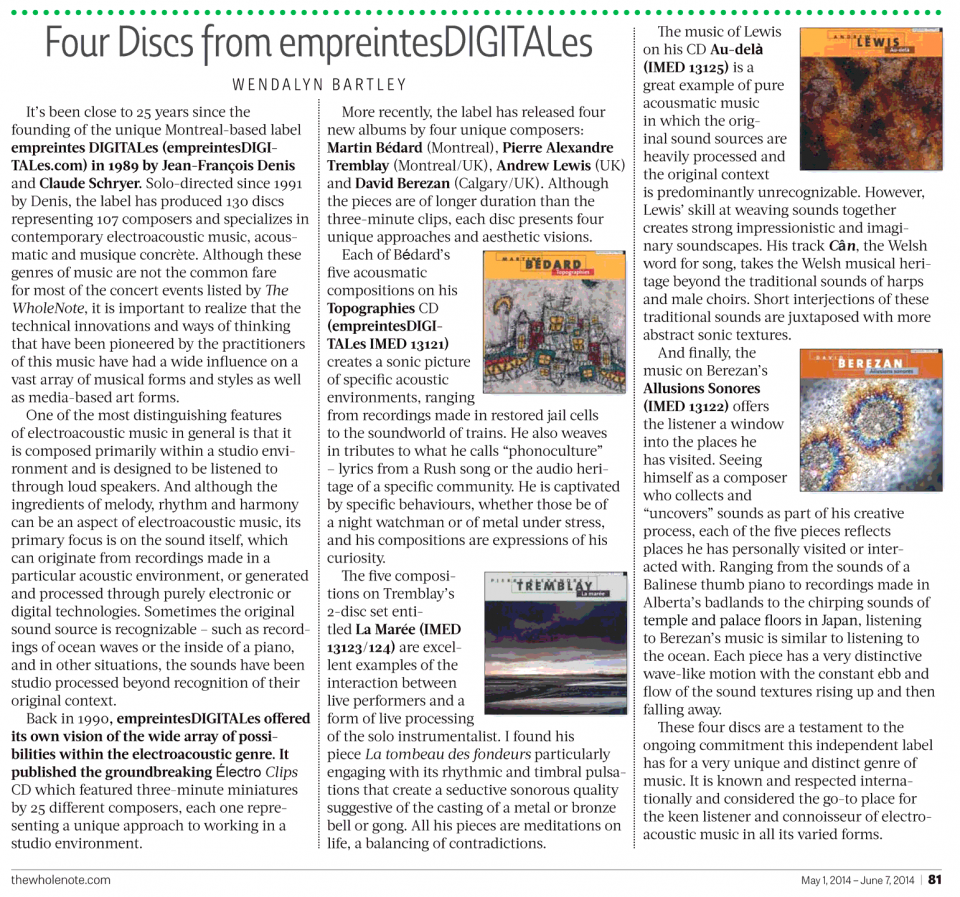 It’s been close to 25 years since the founding of the unique Montréal-based label empreintes DIGITALes (empreintesDIGITALes.com) in 1989 by Jean-François Denis and Claude Schryer. Solo-directed since 1991 by Denis, the label has produced 130 discs representing 107 composers and specializes in contemporary electroacoustic music, acousmatic and musique concrète. Although these genres of music are not the common fare for most of the concert events listed by The WholeNote, it is important to realize that the technical innovations and ways of thinking that have been pioneered by the practitioners of this music have had a wide influence on a vast array of musical forms and styles as well as media-based art forms.

One of the most distinguishing features of electroacoustic music in general is that it is composed primarily within a studio environment and is designed to be listened to through loud speakers. And although the ingredients of melody, rhythm and harmony can be an aspect of electroacoustic music, its primary focus is on the sound itself, which can originate from recordings made in a particular acoustic environment, or generated and processed through purely electronic or digital technologies. Sometimes the original sound source is recognizable – such as recordings of ocean waves or the inside of a piano, and in other situations, the sounds have been studio processed beyond recognition of their original context.

Back in 1990, empreintes DIGITALes offered its own vision of the wide array of possibilities within the electroacoustic genre. It published the groundbreaking Électro clips CD which featured three-minute miniatures by 25 different composers, each one representing a unique approach to working in a studio environment.

Each of Bédard’s five acousmatic compositions on his Topographies CD (IMED 13121) creates a sonic picture of specific acoustic environments, ranging from recordings made in restored jail cells to the soundworld of trains. He also weaves in tributes to what he calls “phonoculture” – lyrics from a Rush song or the audio heritage of a specific community. He is captivated by specific behaviours, whether those be of a night watchman or of metal under stress, and his compositions are expressions of his curiosity.

The five compositions on Tremblay’s 2-disc set entitled La marée (IMED 13123/124) are excellent examples of the interaction between live performers and a form of live processing of the solo instrumentalist. I found his piece Le tombeau des fondeurs particularly engaging with its rhythmic and timbral pulsations that create a seductive sonorous quality suggestive of the casting of a metal or bronze bell or gong. All his pieces are meditations on life, a balancing of contradictions.

The music of Lewis on his CD Au-delà (IMED 13125) is a great example of pure acousmatic music in which the original sound sources are heavily processed and the original context is predominantly unrecognizable. However, Lewis’ skill at weaving sounds together creates strong impressionistic and imaginary soundscapes. His track Cân, the Welsh word for song, takes the Welsh musical heritage beyond the traditional sounds of harps and male choirs. Short interjections of these traditional sounds are juxtaposed with more abstract sonic textures.

And finally, the music on Berezan’s Allusions sonores (IMED 13122) offers the listener a window into the places he has visited. Seeing himself as a composer who collects and “uncovers” sounds as part of his creative process, each of the five pieces reflects places he has personally visited or interacted with. Ranging from the sounds of a Balinese thumb piano to recordings made in Alberta’s badlands to the chirping sounds of temple and palace floors in Japan, listening to Berezan’s music is similar to listening to the ocean. Each piece has a very distinctive wave-like motion with the constant ebb and flow of the sound textures rising up and then falling away.

These four discs are a testament to the ongoing commitment this independent label has for a very unique and distinct genre of music. It is known and respected internationally and considered the go-to place for the keen listener and connoisseur of electroacoustic music in all its varied forms.

“Words are like lies.” It’s a key phrase that only occasionally comes through on Lexicon, the first and newest piece on Andrew Lewis’s fascinating Au-delà, collecting works from the last twenty years and covering a variety of strange terrain. “A page is like a map I try to find my way around,” repeat several voices, at times intelligible and at others incoherent. It’s Lewis’s sonic exploration of dyslexia, where words become interchangeable, transposed, manipulated, or otherwise obscured. Lewis’s Wikipedia entry describes Lexicon as an acousmatic piece with video, which I discovered online after the fact, but it doesn’t require the video to appreciate it (in fact, it might be more exciting and disorienting as pure sound).

“ Lexicon is based on a poem written by a 12-year old boy, Tom, in which he tries to articulate his personal experience of dyslexia. By presenting an imaginary sonic and visual journey through the text of the poem, Lexicon explores not only the challenges, but also the life-affirming creative potential that dyslexia, and a fuller understanding of it, can bring.”

In contrast to the sputtering forms of Lexicon, Dark Glass musicalizes the refracting and reflective surfaces of broken glass with significantly more patience. There is an ebb and flow to its odd arrangement, sometimes cacophonous and busy but often then decaying with ambient patience. Therein lies the strength of Lewis’s often bewildering arrangements: he has a keen and innate understanding of dynamics and pacing that feel narrative and unpredictable. Dark Glass might be the closest thing to a performable piece of music, but it still very much resides in Lewis’s preferred world of acousmatic, unseen sound. In its final moments, it ascends with a crescendo that is disorienting and almost scary. It’s a fitting segue into Ascent, another acousmatic excursion from the mid 90s, intended to be a sonic exploration of the mountainous landscape around the Bangor University studios. It’s full of ups and downs and craggy stumbles, with some truly weird textures that represent Lewis’s knack for sound manipulations so well.

I find myself time and again wondering “How the hell did he make some of this?” And in the age of plug-ins and convenient software, it’s refreshing to be confused by unknown and unseen techniques. Such is the case with Scherzo, my other favorite piece, which closes out the collection. The press release claims that it “brings the listener back to the world of childhood,” but I find Lewis’s vision far more skewed. Children’s voices are time-stretched and manipulated into a chorus of scary drones and disorienting waves of sound. The clever device of stretching voices into tones is exciting, where the human voice and something altogether synthetic are hard to distinguish from one another. Something as harmless as the innocent voice of a child becomes almost nightmarish when put through Lewis’s prism of sound manipulation. Au-delà is not exactly casual listening, but attentive listeners will no doubt be rewarded with Lewis’s talent for obfuscated sound and aural confections.

Au-delà is not exactly casual listening, but attentive listeners will no doubt be rewarded with Lewis’s talent for obfuscated sound and aural confections. 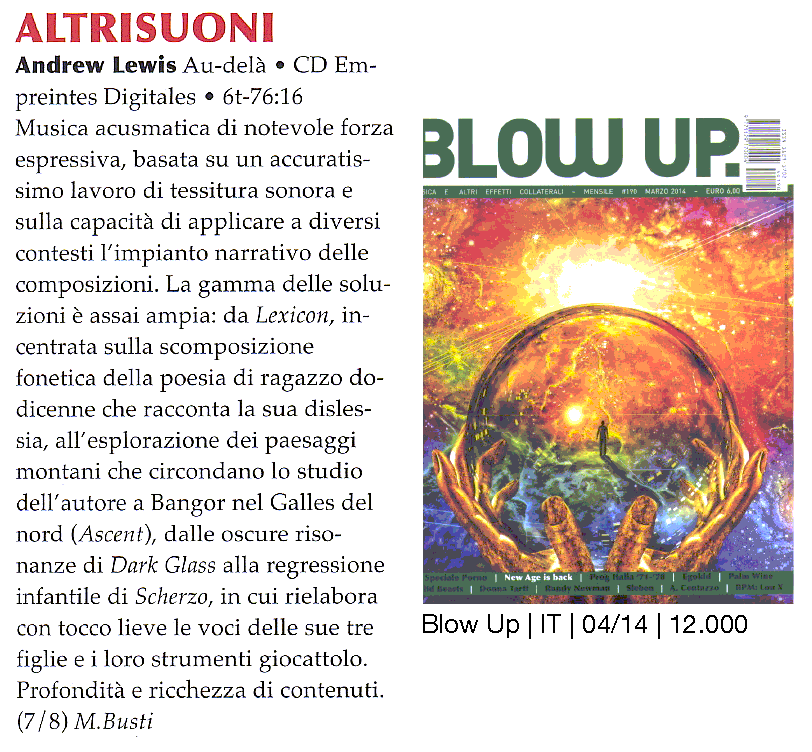 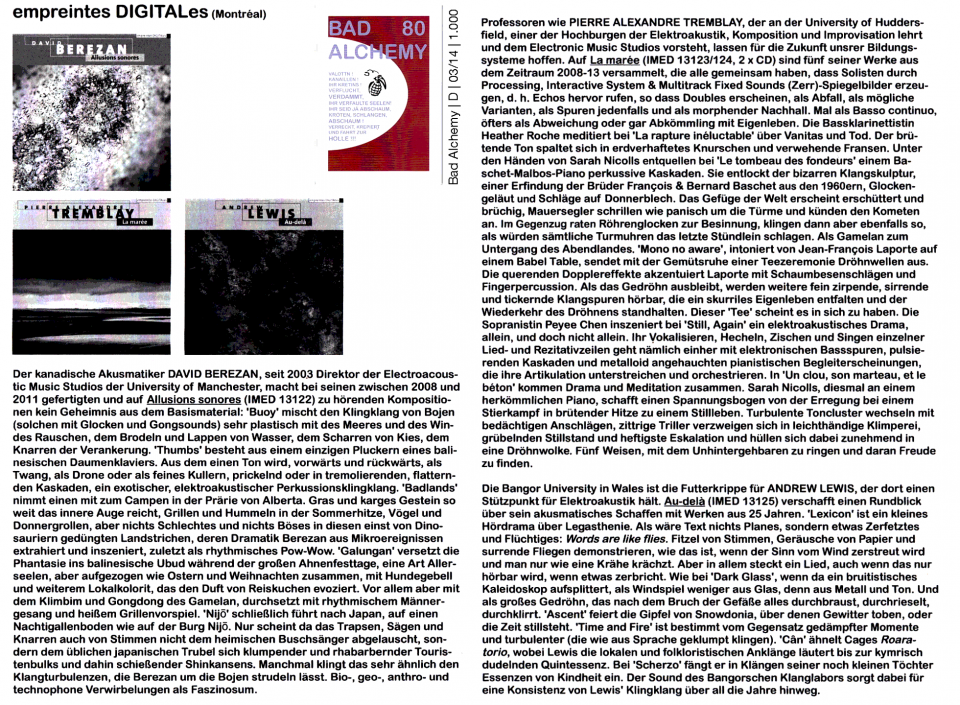 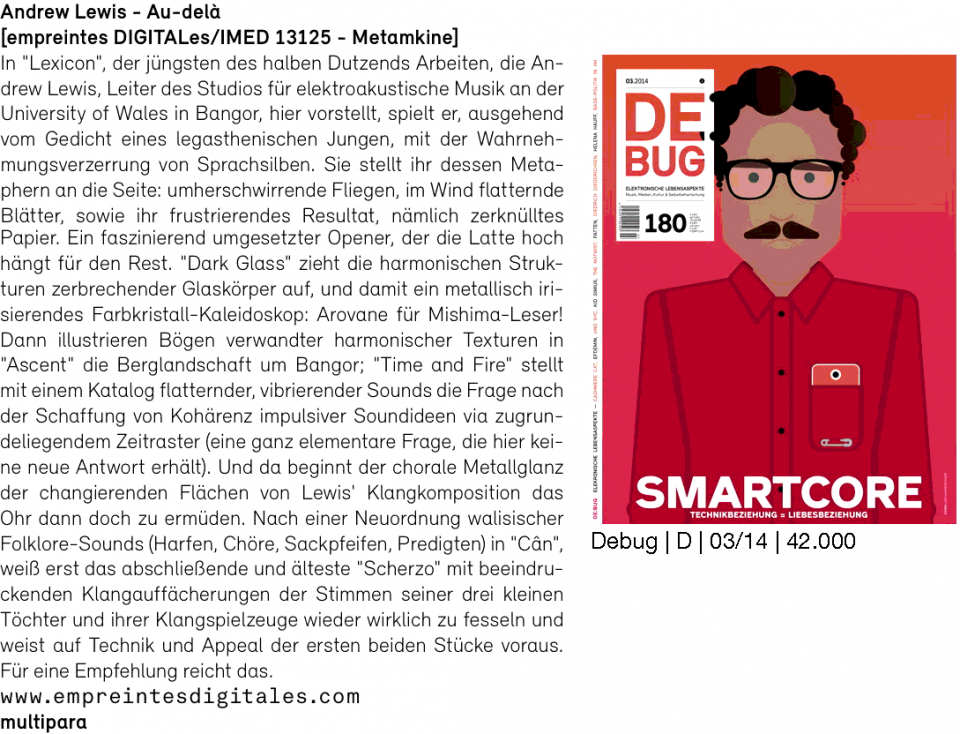