… their interior lives bleeding into infinity as our own universe is condensed into one of many microdots that go pinging off your shiny surfaces and windows. — The Sound Projector, RU

This was very enjoyable, and the kind of album that will always reward another listen. — Musique Machine, RU

‘Music that produces its own forms in the continual weaving of a spatial fabric’ is how Swedish sound engineer and electroacoustician Erik Nyström likens ‘his’ music to seemingly arbitrary cosmogonic forces as they pass almost accidentally through humanly appreciable forms. Something of a Serious Seeker of ‘spatial textures in acousmatic music’, the dazzling descriptions of his four compositions don’t quite deliver the shock of primordial violence I’m somehow expecting, though I do get the feeling that these pieces are quite happy to be left to their own devices.

Like a vague approximation of the Lorenz Attractor, the resounding void of Latitudes mutates like the weather filmed in time lapse, shifting too rapidly for our deep inner peace yet glazed with smoother surfaces than your usual jump-cut sound-editing shenanigans. This sounds quite typical of the empreintes DIGITALes establishment: sci-fi space-scapes and processed sounds turned inside out; their interior lives bleeding into infinity as our own universe is condensed into one of many microdots that go pinging off your shiny surfaces and windows.

Lucent Voids adds squelches of mechanised bird twitter and virtual reality sea spray to this vertiginous feat of sonic telescoping, but with a little more rough-housing before the end of the rainbow. Unsurprisingly, Cataract is of the same stratosphere, providing similarly psychotropic scenery and eventual pre-landing disillusion. While far from bucking this trend, Far-from-equilibrium is a sort of hapless A.I. accident that might have bubbled out from a table-top improviser’s set of material-testing stretch and strain. The most dynamically vivid of the four pieces, it seems designed to disorient the listener into seeking respite back at the start of the CD, where things are unlikely to have remained the way they were.

… their interior lives bleeding into infinity as our own universe is condensed into one of many microdots that go pinging off your shiny surfaces and windows.

Here’s an unusually packaged CD, wrapped in layers of entangled card inlays. Pulled apart, they reveal an outer card slipcase, an inner card inlay — both covered in texts and largely abstract imagery — and an odd little piece of card that holds the CD itself. The texts reveal recording details, as well as annotating the pieces themselves, of which there are five. The tracks, all recorded between 2008 and 2012, vary in length from around twelve minutes to over twenty. All five are rigorous, ‘hard-boiled’ electroacoustic works.

I’m not going to pretend to remotely encapsulate what goes in Morphogenèse; given the lengths of the individual pieces, and the sheer amount packed into them, I will instead offer up some highlights and more general thoughts. As I said above, the album compiles five serious electroacoustic works, constantly shifting and developing. The first track, Catabolisms, doesn’t start off too staggeringly; however, before long, it establishes a very nice drone. This disappears into a section that sounds simultaneously like a sci-fi spaceship, and something more organic — rocks and water. The sci-fi atmosphere is also found in the ominous drones that underpin some of the tracks, as well as the ‘digital’ feel that pervades most of the album. Later, near the close of the track, the sounds quickly combust/rot to a deathly hush — it’s a really nice transition between sections. Latitudes, the second piece, is perhaps best represented by the snaking, strained, whistling drone that dominates the early sections. The next track, Lucent Voids, begins with a soundscape that seems to summon water movements and bird-song, before adding bell-like sounds and hard, spacey tones. After the 16-minute mark, there’s a sudden, outbreak of near-melodicism, with a section that lurches like court music from some alien civilisation. In the context of the album as a whole, this is quite a startling moment for the ear, and all the better for it. The fourth piece, Cataract, is perhaps more low-key, less showy in tone than it’s previous counterparts, often burbling along quite quietly. Though there are still points of darkness and near-whiteout. Far-from-equilibrium, the final piece (and oldest), might be my favourite track on Morphogenèse. It seems to carry a more visceral, even aggressive, selection of sounds than the other pieces. It also has sounds that are much less processed, even near-raw, and these add great colour in terms of texture and movement. There are some fantastic moments where Nyström pulls sounds inside out, tearing and straining them — it’s compelling and beautiful.

Like I said above, Morphogenèse is not a release suited to a short review — it’s arguably not really an album that I’m overly ‘qualified’ to give much insight to, given it’s clear academic designs. However, there is a wealth of material here to digest and peruse, all of which demands close listening. I’ll admit that the prevailing ‘digital’ feel to the sounds is not to my particular tastes, but Far-from-equilibrium, where this effect is less pronounced, more than makes up for this. This was very enjoyable, and the kind of album that will always reward another listen.

This was very enjoyable, and the kind of album that will always reward another listen.

British[-based] computer composer Erik Nyström seems to focus more on the process of making a shape than the shape itself in the explorations that got collected in Morphogenèse; the explanation of a process could be more or less an easy task, but rendering it by means of sounds is much more engaging and troublesome, but Erik managed to walk over this arduous and somehow trackless path by means of riveting sonic strategies, that he developed within pertaining conceptual field. A sort of elastic noise is the sparkle of the opening Catabolisms, whose thrilling sequence of aggregating and disgregating textures really mirrors the description of catabolic processes by German art theorist and perceptual psychologist Rudolf Arnheim in his essay Entropy and Art (“all sorts of agents and events that act in an unpredictable, disorderly fashion and have in common the fact that they all grind things into pieces.”), referred in the introduction of the track, which gradually reaches a sort of point of no return, where the breaking of all chemical bonding and the bursts of energy that followed each step of these catabolic processes pushes listener close to a sort of nowhere; similarly, a sonic sparkle — the elongation of a pure frequency of a sort of diapason — ignites the following Latitudes, a track which manages to evoke a generative process of gradual expansion that begins with a compressed sonic corpuscle. Lucent Voids, the longest composition of this collection, sounds like an unpredictable game, whose aim is the modelling and the thinning of the diaphragm between time and space, while Erik seems to add film and sheers to pure sounds on the track Cataract in order to render the analogy with the medical condition of the eye lens as well as the Greek etymology of the term “acousmatic” — its origin can be traced back to Pythagoras and should derive from the term akousmatikoi, the outer circle of the disciples of the Greek philosopher who could hear the lessons of their teacher, who spoke from behind a veil so that his presence could not distract them from the content of his lessons. These four pieces are stereo versions (for home listening) of pieces that were originally conceived for 8-channel concert projections, while “Far-from-equilibrium” — an impressive electroacoustic translation of almost randomly self-generating entropic sonic entities and textures — comes from a stereo tape. A pair of really good headphones is highly recommended.

… Morphogenèse, featuring music by Swedish composer Erik Nyström. Permeating all five pieces on this disc is an overt sense of evolution, as though the music was changing shape and manner in real-time as we listen. In Latitudes, everything begins from a simple bell strike, its resonance (which, although not always obviously, remains throughout) leading to a plethora of developments that, parallel to the notion of evolution, also suggest a sense of moving ever closer to something, in the process discerning increasing amounts of surface detail. The rather gorgeous sheen of this piece makes the effect hypnotic, but in works like Far-From-Equilibrium and Catabolisms Nyström’s concern is with sounds altogether more granular and fragmented. Yet these are moulded and compacted into startlingly present episodes where the music, bristling with organic energy, appears to muscle its way beyond the confines of the loudspeakers. Lucent Voids, at 20 minutes the longest work on the disc, makes both the deepest and most long-lasting impression. It could be heard as a synthesis or a summation of the other four works, embracing granular textures, extended pitch resonances, burly inner movement and gradual transitions of forms. But it transcends all of this, Nyström constructing a vast dramatic canvas that begins in the depths, passing through a hectic interplay of pitch and noise, and a number of increasingly vertiginous high points, to a place of genuine grandiosity, enveloping us in layer upon layer of highly variegated seams of material, dissipating into something resembling the crackle of vinyl mixed with an excited Geiger counter drenched by falling rain. Absolutely breathtaking. 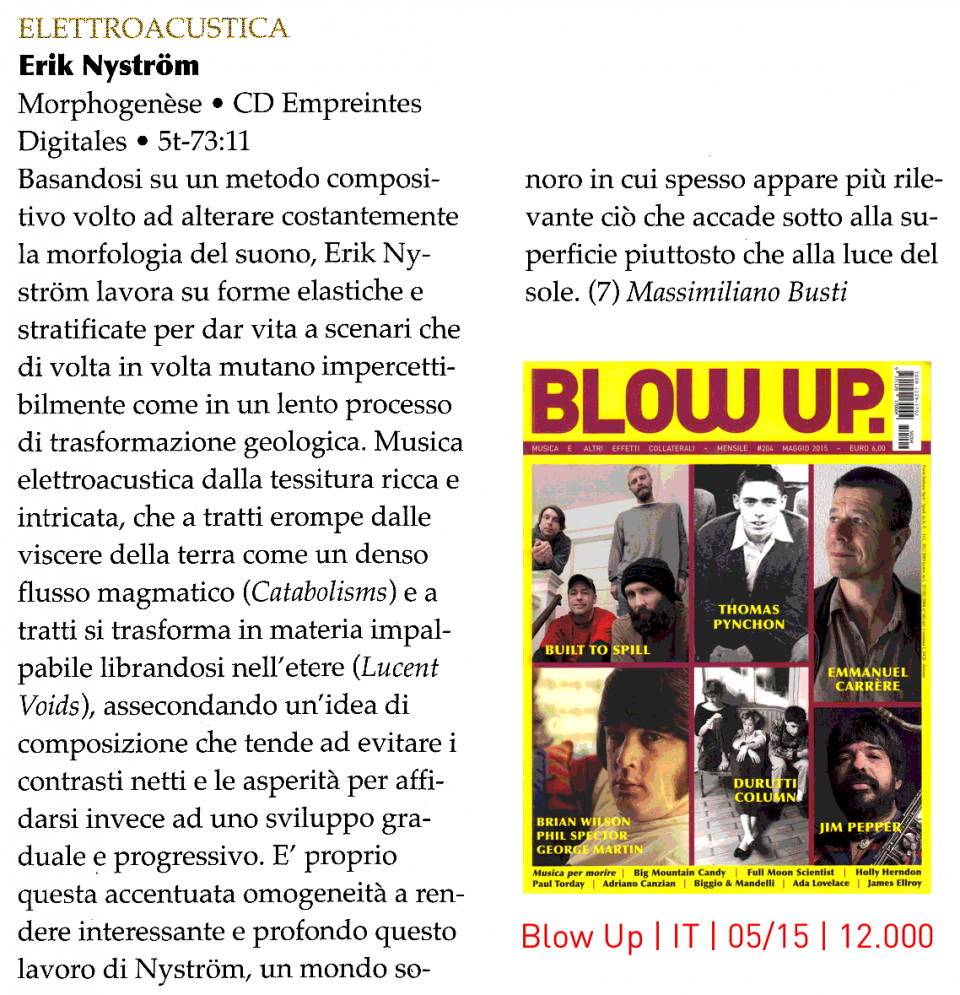 Most albums are instantly accessible, their underlying concepts easily penetrable by the common public. Not so Morphogenèse, an album that travels from deep sea to deep space, searching for boundaries yet finding only greater expanses.

The track descriptions can be intimidating, so we’ll quote only one in this review. Erik Nyström‘s first sentence reads, “The title alludes to phases where sound is undergoing a process of molecular milling, fragmenting into its most primitive constituents, not unlike the ‘catabolic processes’ Rudolf Arnheim described in his essay Entropy and Art.” The artist is clearly not appealing to the average reader. For such (including myself), we’ll need a different tactic.

The title of the album can be broken into root words morphê (shape) and genesis (beginning), which makes morphogenèse “the beginning of the shape.” Nyström’s work is inspired by matter, space and sound as they evolve and/or decay. More importantly, his interests lie in the “novel organization of sound.” On this album, he executes his vision in a series of elaborate, extended movements.

The album is approachable not only despite its complexity, but because of it. These five pieces — none briefer than 12 minutes — may lack hooks, but they yield a clear sense of direction. Nature vacillates between the random and the ordered, and these compositions follow suit; while each changes shape as it develops, each has a chartable shape, from parabola to ascending line, suggesting later patterns like unfinished frames of code.

Nyström’s electronic bubbles and teeming drones imitate familiar sources: boiling water, steam hisses, lapping waves, buzz saws, wind. Some churn like magma; others erupt like hot spring geysers. An occasional bell strike offers a solid foothold on an occluded path; on Lucent Voids, brooks and birds contribute a sense of (adapted) reality. The repeated chords of Cataract yield the most recognizable form, yet even these change along the way. The components remain in motion, adopting new paths, imitating the black tributaries of the cover image.

These thickets of sound reflect unmapped territories, exuding promise and danger. It may have been difficult for Nyström to commit them to disc: a fixed form for the unfixed. In his mind, these works continue to mutate, like black holes expanding and imploding.

… these works continue to mutate, like black holes expanding and imploding.