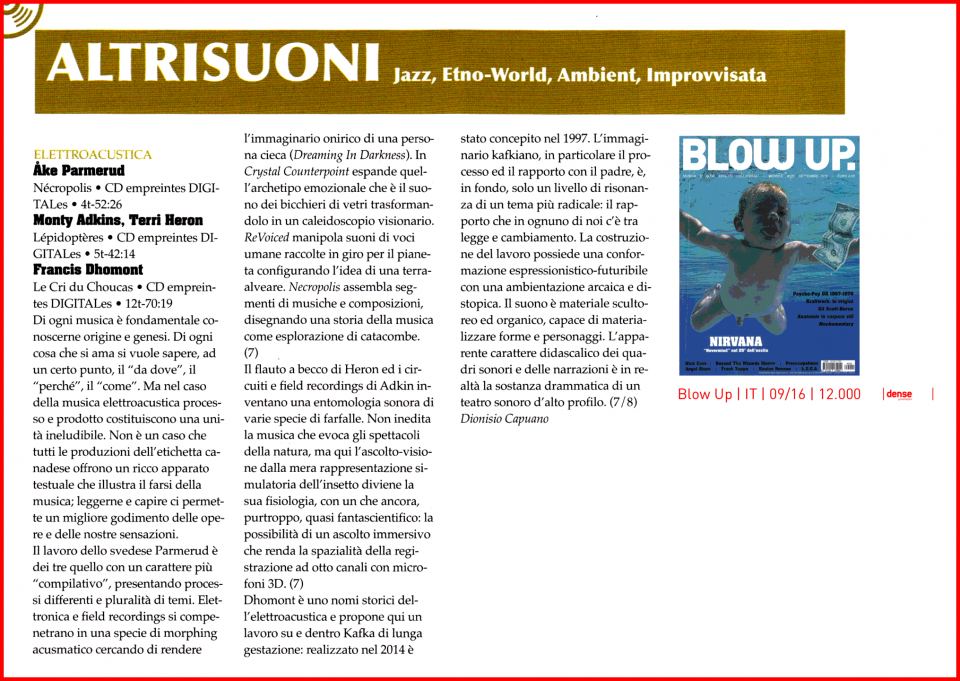 Taken as a whole, Lépidoptères is a nicely strange and engrossing cycle, one that finds a telling compromise between the immediacy of beauty and a more radical exploration into modes of behaviour and interaction. 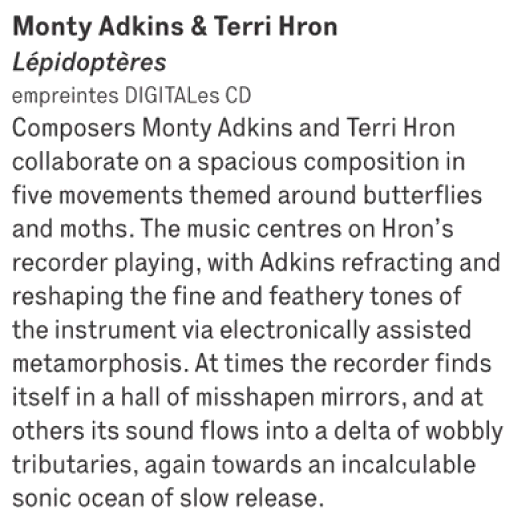 Composers Monty Adkins and Terri Hron collaborate on a spacious composition in five movements themed around butterflies and moths. The music centres on Hron’s recorder playing, with Adkins refracting and reshaping the fine and feathery tones of the instruments via electronically assisted metamorphosis. At times the recorder finds itself in a hall of misshapen mirrors, and at others its sound flows into a delta of wobbly tributaries, again towards an incalculable sonic ocean of slow release.

One of the world’s most ancient musical instruments is combined with advanced electronics in a new recording from the University of Huddersfield’s Monty Adkins. It is the product of a key transatlantic collaboration.

Professor Monty Adkins The disc, named Lépidoptères, has been released by the renowned Canadian label empreintes DIGITALes. It consists of a cycle of five works for recorder and electronics co-composed by Dr Monty Adkins, who is a performer and Professor of Experimental Electronic Music at the University of Huddersfield.

He teamed up with Montréal-based Dr Terri Hron, a composer and a performer who specialises in the recorder, a centuries-old instrument that also takes its place in highly contemporary music.

The composition of [Lepidoptera] took place at the Université de Montréal, whose Vice-Dean Robert Normandeau (pictured right) – an established figure in the world of electronic music – has a long-standing relationship with the University of Huddersfield.

Professor Adkins and Dr Hron then recorded their work at McGill University, which uses a 22.2 surround sound system developed by research at Japan’s national public broadcaster. It is the only facility of its kind outside Japan and provides the ideal environment for creating a totally immersive musical experience.

[Lepidoptera] is a work for recorders and electronics made of five movements, each referring to families of butterflies and moths.

“The nature and character of the recorder is similar, with its varying tonal colours, and its transformations from caterpillar to chrysalis to butterfly,” said Professor Adkins. “This inspired similar connections and interactions between the recorders and the electronics.”

The [Lepidoptera] project led to the development of an algorithm to control the sound in relation to the recorder.

“Rather than creating a fixed piece of music that the recorder plays from start to finish, this research has created a system where it is possible to control the way in which the sounds and the various processes work all the way through the movement,” explained Professor Adkins.

“As a result each performance is never the same, providing a unique experience for the audience and the performer.”

After the success of [Lepidoptera], future projects with other countries are in the pipeline as the University of Huddersfield and its Canadian partners plan an international network of musical collaborations.