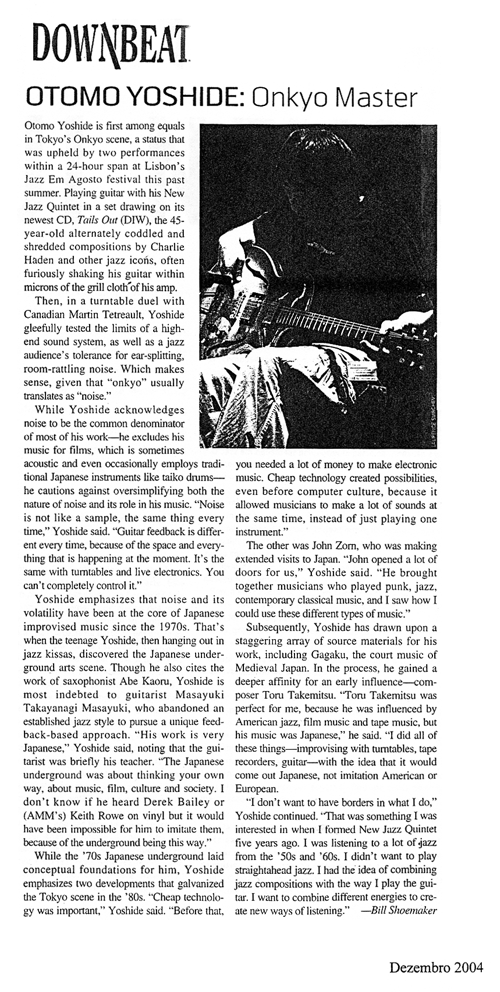 […] I swung by Tonic and saw Otomo Yoshihide play a turntable-noize set with Martin Tétreault. They sat on stage making a furious din with their mangled Technics decks, while the assembled crowd sat in chairs, watching them quietly and utterly RESPECTFULLY, sometimes speaking to each other in awed hushed tones between sets. That is what unnerves me, I think, about improvised music in that sort of venue, and is why I prefer to get my noise fix from going to Lightning Bolt shows. You’d think with that kind of extremely ugly and powerful music — and I really like a lot of Otomo Yoshihide’s work — you’d be pushed by it into the physical realm, to dance or at least move, but not just sit there. I couldn’t bear sitting down so I stood up, drinking beer and fidgeting while watching them spin warped records, scraping tone arms into grooves under extreme amplification. After the set I went up and looked at their setup; the tone arms had been cut and gouged and taped up with springs hanging out, the 45s used for the performance had titles like ‘Lesson #29’. When I looked at the wrecked decks I couldn’t help but feel like it was a waste to ‘adjust’ a table like that, even for a noise project; I’d been so conditioned by a lifetime of loving record players and fixing broken garage-sale ones to treat them with care and calibrate them precisely, so to see expensive Technics 1200s with their guts hanging out seemed, well, so decadent, and shocked me in a way that seeing a wrecked guitar wouldn’t. (I remember reading an interview with Kraftwerk from the late 70s where they bemoaned people who smashed guitars, talking about how long it had taken them to save for Hohner amps and how they couldn’t comprehend smashing up their own gear.) I think another reason why I feel this way about tables is that in DJing, you’re often interested in smoothness, perfection, a continuous mix, getting things beatmatched exactly. (in other words, a lot of work in an attempt to make everything look effortless!) Even in scratching, perfection is key; there’s good scratching and bad scratching, and in hip-hop you still have to stay within the bounds of rhythm. But seeing the brutalized Technics being forced to vomit up horrible noise made me realize that they’d made the record players their own, that they were, after all, just machines to be used by people, not people to be used by machines, and that the flinching they provoked in me when they smashed an expensive tone arm into a virgin piece of vinyl was perhaps part of the point.

… the flinching they provoked in me when they smashed an expensive tone arm into a virgin piece of vinyl was perhaps part of the point.

Martin Tétreault liked elementary school. A lot. Which might be one reason why he has a fondness for using the Calliphone turntables used in schools in the ’60s and ’70s.

The story of how Tétreault went from visual arts to turntablism is more or less well known, how he took a vinyl album, cut it in half, and glued the pieces back together backward, thus producing an instant “symphony.” This was the mid-’80s, and he knew nothing of the turntable experimentalism of people like Christian Marclay. But he was soon brought up to speed when guitarist André Duchesne, a neighbour, heard what Tétreault was up to and drew him to the attention of the Ambiances Magnétiques collective.

Today, he answers a compliment on his considerable improvising skills rather modestly, saying, “I was lucky because I was able to develop my improvising by working with the best people in Montréal right away, people like Jean Derome, René Lussier, Diane Labrosse, Michel F Côté and Robert Marcel Lepage.”

Tétreault’s method involves a deconstruction of the turntable and the vinyl recording, though these days he no longer uses vinyl for the music on them. “For one thing, I don’t have to worry about copyright issues anymore,” Tetreault says, half-jokingly.

Tétreault’s approach has been influential, not least on Otomo Yoshihide, arguably Japan’s best improvising musician. When Yoshihide saw the duo of Tétreault and Labrosse at the Angelica Fest in Italy in 1997, his music took a turn in a minimalist direction. He disbanded Ground Zero, which had been at the core of his musical activity, to pursue smaller-sized projects.

In April of this year, the duo toured Europe, and Tétreault hopes that an album will come out of the recordings of the concerts.

Yoshihide plays with two modified Technics turntables and a guitar amplifier that he uses for feedback. Tétreault uses a three-tone arm turntable with three pedal volume controls. No reverb, no delay.

“It’s visual. When we do a move, what you see is what you hear.” But what you hear might not sound like what you expect, Tétreault explains. “It’s not electronic, it’s completely analog, but it may sound electronic.”

“It’s a very good energy between us,” Tétreault states. “Our concerts are completely improvised. We never, during the tour, talk about music. We never discuss pacing or things like that.”

The duo’s appearances in Quebec City (October 28, 2003) and Montréal (October 29, 2003) are the Canadian leg of a four-city tour that will go to New York and Boston the next two evenings. Because of certain travel restrictions, Tétreault will be using turntable motors, tone arms and prepared vinyl in New York and Boston. They will be his first performances in those cities. It will also be the first time that he will perform with those devices.

A bit of a risk, no? “These days, I like to take more risks. If I find I can make a new sound, I don’t explore it, I just try it out in a concert.”

For Tétreault, his deconstructive experimentalism takes him back to his school days. “The turntable is usually only treated as a passive object, but there are a lot of hidden sounds it makes as an object. The sounds in the turntables were always there in the classroom.”

Tétreault’s approach has been influential…

The state of turntablism has undergone rapid transformation over the last decade or so. No longer content with manipulating vinyl in unexpected ways, some artists have now turned on the tables themselves, utilizing every inch of the case, platter, motor, tone arm and stylus of the venerable record player.

Martin Tétreault, part of Montréal’s Ambiances Magnétiques collective, is one such artist. He began this evening with a solo turntable set. Looking something like an impish scientist he sat pensively behind his mixer and two turntables, if turntables you can call them. In fact, one was simply a spinning platter raised high on the table, a piece of rotating metal with a disembodied stylus and tone arm that he used to probe various items at hand. His other turntable was a standard Technics, although Tétreault often eschewed vinyl in preference to metal plates, and he often used open RCA cables in deference to the stylus to generate rumbly, sparking and oddly explosive sounds. He ended one piece by throwing a 7" record onto a pile of objects he had built up on his stylus, eliciting audience laughter, though his more frequent slamming of the tone arm would cause a serious vinyl addict to cringe in horror. At times his approach seemed chaotic or even spastic, while at other times he built revolving grooves that were glitchy and intense. It’s difficult to call Tétreault a DJ in this context, but as a turntablist he sees many unexpected possibilities.

It was clear from the two Technics decks on Yoshihide’s table that he would focus on the turntables, so it came as a bit of surprise that Yoshihide played much of his solo set on guitar, playing through a blond Marshall amp. His playing was drenched in feedback, starting with a buzzy intro that crescendoed into a ringing harmonic pallette, growling and angry. His playing was urgent, piercing, and vicious, a dirty blues with strong tremolo. Out of this slowly emerged the strains of Ornette Coleman’s ”Lonely Woman,” drifting in the feedback, a languorous rendering of the song. This slowly receded as Yoshihide began applying clips and various tools to his strings to effect, generating blocks of feedback and rich tones that rung and dropped under his thoughtful control. Yoshihide then turned to the tables to complete his solo set. He began by slamming on a disc, generating strong feedback, shaking the decks and probing at his discs to create long looping harmonic grooves punctuated with sudden collisions, unlikely beats and internote interference. The set ended with something sounding like an alien death ray, a fitting end to a charged set.

After an intermission the players returned as a duo, with both players at their turntables. The similarities in style were as striking as the contrasts: both used their styli as a probe, striking at objects that occasionally included vinyl records, but also included metal plates, cymbals, and seemingly anything loose and nearby. Yoshihide had springs mounted on his styli to force them into repetetive grooves. Tétreault picked up a vinyl record and scratched at it with a free stylus as though it were a guitar. Both developed long grooves over which they busily worked, but generally Yoshihide tended towards more patient development of sounds relying often on delays, including an extended interaction with the package from a battery against his tone arm, making a wailing melodic cry. Meanwhile Tétreault jumped between sound sources in percussive and disruptive ways. As the set developed both settled into grooves, and the point of applying their approaches to turntables as opposed to any other solid object became apparent, as the rhythmic, cycling nature of their sound became more obvious. Dueling airplanes, industrial washing machines, droning noise with the beating of construction nightmares married and exploded, the factory gone haywire under the hands of these two noise pilots. The sheer feedback, interbeats and thunderous sounds threatened to change the listener’s body chemistry, a satisfying and jarring experience.

The sheer feedback, interbeats and thunderous sounds threatened to change the listener’s body chemistry, a satisfying and jarring experience.