The cellist Seth Parker Woods presented an evening-long, multimedia program titled Difficult Grace Saturday evening at the 92nd Street Y’s Kaufmann Concert Hall. It was the full staging’s world premiere, but, as Woods remarked, he had premiered a “nucleus version” in February 2020 in Seattle; the coronavirus lockdown gave him the opportunity to rework his concept into its current form.

Woods was already a cellist of prodigious technical gifts and sharp intellect. This program has stretched him even further into performing as a spoken word artist and singer as well as instrumentalist.

Aided by the choreographer and dancer Roderick George — a childhood friend from Houston — Difficult Grace was a feast for the ears, eyes and mind.

In one portion of Freida Abtan’s My Heart Is a River, the audience sees a prerecorded video projection of two dancers as Woods plays live in front of the screen. The dancing figures straddle a cello that they are reimagining as a boat. The performer in front — actually Woods himself, with dancer Tamzin O’Garro behind — is wielding the cello bow as an oar. It’s a marvelously apt metaphor: Woods is an artist rooted in classical music, but whose cello is a vehicle that takes him, and his concertgoers, on wide-ranging journeys.

The program included works by a large roster of composers, many of whom used electronic sound design as well as live acoustic cello: Fredrick Gifford, Monty Adkins, Nathalie Joachim, Abtan, Ted Hearne, Devonté Hynes and Pierre Alexandre Tremblay. (In addition to Coleridge-Taylor Perkinson, who died in 2004.)

Gifford’s piece Difficult Grace, which lent its name to the entire program, included projected artwork by Barbara Earl Thomas and was inspired by Dudley Randall’s poetry. Regrettably, it was difficult to discern from the auditorium seats much of what Woods was saying during long spoken-word stretches. (Projected supertitles would be a welcome addition.) The same was true during Hearne’s work with an unprintable title, with texts by the poet Kemi Alabi. Within the most riveting section of Hearne’s piece, Woods sang and played R&B-flavored harmonies atop hip hop-inspired electronic beats.

Each composer who used prerecorded cello and electronic sound design, sometimes with on-the-spot manipulations, did so to very different aesthetic ends. Woods performed two movements from Abtan’s piece (Opening Out and Seeping In), in which the electronics and the live cello swirled around each other in haunting, echoing duets. Adkins’s gentle, cinematographic Winter Tendrils, accompanied by an equally warmhearted film by Zoë McLean, used electronics almost like an invisible string orchestra, framing Woods’s cello in lush, glowing harmonies.

The most overtly narrative work was Nathalie Joachim’s The Race: 1915, which used projected images from the artist Jacob Lawrence’s Migration Series” and texts taken from The Chicago Defender, the Black newspaper that was founded in 1905 and urged Black Americans to move northward in what became the Great Migration. Joachim’s music alternated between busy, cyclical motion and periods of meditative, slow arcs.

The most traditionally “classical” piece during the evening was a technically demanding cello sonata written by Devonté Hynes, whom certain music-loving New Yorkers may recall from his recent stint opening for Harry Styles at Madison Square Garden.

The evening ended with a powerful duet between Woods and George dancing live onstage in Tremblay’s asinglewordisnotenough3 (invariant). It’s a piece that crackles with nervous, coiled energy. Woods often attacked his strings with furious intensity, while George’s dancing combined solid muscularity and sinuous movements. Somehow, all of these emotional currents found a home inside Tremblay’s score.

This program has stretched him even further into performing as a spoken word artist and singer as well as instrumentalist.

[…] The only other work of substance in this concert was Pierre Alexandre Tremblay’s Bucolic & Broken. And what substance! Here, and only here, was a true demonstration of the surround capabilities of HISS. But it wasn’t just the positioning of sounds, Tremblay’s choice of sources – ranging from a scratching pencil to a boiling kettle to birdsong to a tinkling piano gesture to a woman walking her dog – were superbly imaginative, and the way these were juxtaposed into a strange structural form was unconventional but completely convincing. It wasn’t in the usual sense acousmatic, Tremblay instead presenting these sounds as found sound objects arranged into a kind of spacialised collage. But what set the piece apart from almost everything else in this concert (and, perhaps, most concerts) was its demonstration of Tremblay’s very obvious playfulness and a palpable sense of wonder at the sounds he’s working with. For electronic music to be as accomplished as this while being so much fun is a rare combination. […]

For electronic music to be as accomplished as this while being so much fun is a rare combination.

[…] In Pierre Alexandre Tremblay’s electroacoustic Un fil rouge the electronics were for the most part uncannily present – which is to say that they felt like a tangible yet invisible additional performer on stage. They manifested most prominently in a recurring motif, extending the ensemble’s tutti accents into an accelerating (and occasionally decelerating) sequence of impacts. This motif recurred so often, in fact, that it became in essence a refrain, between which were a number of episodes providing a contrast to its impetus and momentum. Though they exhibited far less energy, these episodes were the most striking moments of the piece, Tremblay more prepared to let the material drift and linger, resulting in beautiful, dreamy sequences. Even when they were pushed along, though, this episodes remained distinct in the way they seemed more ragged, the result of playful spontaneity driven by an exciting bubbling sense of abandon. […]

Friday at HCMF began with a recital by rising star cellist Seth Parker Woods. I’ve had the opportunity to see Woods play once before (at HCMF 2014) and the experience was a highly impressive one, so I was very much looking forward to seeing him in action again. He did not disappoint, performing four challenging works, two of which involved live electronics. […] The unquestionable highlight of the concert, though, was Pierre Alexandre Tremblay’s asinglewordisnotenough3 (invariant), which provided both a composition masterclass in its seamless, aurally non-hierarchical interaction between acoustic and electronic, as well as a performance masterclass in its bravura display of frantic virtuosity from Woods. The work’s narrative was excellent, progressing through a series of evolving episodes each fuelled by the cello, many of them rhythmically taut (though never sounding metrically fixed) with a tendency later to expand out into more sustained soundscapes where the cello’s material was more buoyant. Utterly thrilling, and Woods unstoppable performance was outstanding. […]

… a composition masterclass in its seamless, aurally non-hierarchical interaction between acoustic and electronic… 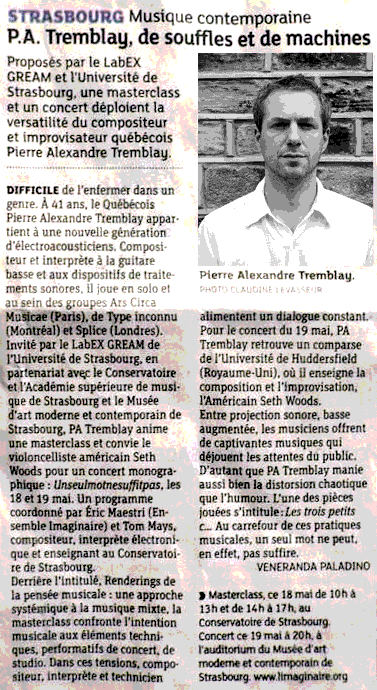