On Trilogie d’ondes, Gobeil collaborates with ondes Martenot virtuoso Suzanne Binet-Audet. Like an earlier empreintes DIGITALes release that marries the classical guitar with various Aousmatic composers (see my write-up here), Trilogie d’ondes achieves the same great synergies between Gobeil’s tape generated maneuvers and the most disparate instrument you can think of, the ondes Martenot. As you can probably guess by now, it works!

The following quote by Binet-Audet may give some clues as to why this partnership sounds so great (bolding mine):

“More electronic instruments have been invented since and are now omnipresent in our musical universe. Because of its sensory approach closely linked to the performer’s nervous system and its flexibility that allows it to respond to the performer’s slightest musical intention, the ondes Martenot remains unlike any other. It is often considered a forerunner of today’s electronic instruments, but it is actually somewhat of a slightly eccentric colleague: the rationale behind its creation keeps it closer to the great instrument-making tradition. That is probably why it made it through the 20th century and is still being included in new compositions. Thanks to its 80-year history and large and rich repertoire, the ondes Martenot has obviously secured itself a spot in music history.”

Like all the great acousmatic composers, Gobeil’s ability to organize sounds into a cohesive whole that allows the participant (you) to create their own visual / virtual / visceral narrative demands that these sounds interact with your limbic system. Being a disinterested outsider really doesn’t cut it when you listen to this music. Engagement, on a mental, and as stands to reason, a physical level is key. My bolded part above plays into what may have been the reason this pairing sounds so good. Doubting that both musicians were in the room at the same time, I’m going to hazard a guess that Gobeil supplied Binet-Audet his material, and she composed around that. I can very well imagine, as Binet-Audet was contributing her parts, the soundscapes that Gobeil created tapped into her Limbic system allowing her to “bring the music” to the ondes Martenot by way of the sensory approach that she mentions above. I can also imagine a live performance which would be a very interesting juxtaposition of her gestures on the ondes Martenot triggered off the synthetic material created by her partner. So, instead of machine triggering machine, the approach would be human triggering machine (Gobeil), triggering human, triggering instrument (Binet-Audet). In a live improvised (or not) setting, the permutations could be endlessly fascinating! Additionally, the dichotomy between what is traditionally thought of as a non-gesture form of music (Gobeil’s Acousmatic sections) is now organically attached to a human element that can change with each performance. In a case like this, the ondes Martenot sounds like the perfect tool to achieve this. (I wonder if they ever thought of taking this on the road?)

The music on Trilogie d’ondes is much more dynamically busier than Trois songes. Gobeil’s soundscapes have a rough and tumble attitude and the mood is quite a bit darker because of it. The ondes Martenot adds a celestial/cosmic element, usually when Gobeil is laying out. At times it sounds like a lonely pedal steel guitar that slowly builds in pitch and intensity. During periods like this, Gobeil brings in a slowly escalating, manic tension that succeeds in goosing the music into the stratosphere.

For the most part, Trilogie d’ondes is more of a Gobeil showcase for his acousmatic stylings with the ondes Martenot adding just the right amount of unique textures, so the pairing is not exactly equal. For me, the ondes Martenot uplifts this record from being a “great” Gobeil record to being a “special” Gobeil record, and that’s the primary reason I’ve included it in this write-up. 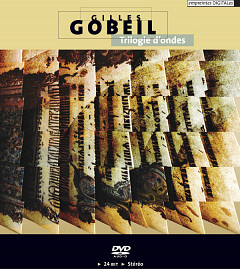