Daoust is an electroacoustic composer whose work, in contrast to that of Dhomont is (relatively) more easily grasped. This has two causes: one is that he often includes an acoustical counterpoint (accordeon, flute, plano, voice) to the electroaoustical sounds. This enables the listener to choose a side. Secondly, his musical movements have much stronger ‘gestalt’. The movements are more defined. In form (envelope, granularity, etc.) as well as in relation to their environment.

A thought that jumped up, when I listened to this CD, was that the music is so sympathetic. It shows a sympathetic personal feeling. Daoust is much concerned with two themes: the musical past, and the performer (a remnant of the musical past). He is unable to explain in words why this is so, and why bother? He expresses himself clearly enough through his works. 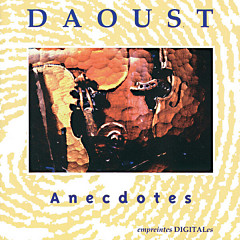 Anecdotes
… the music is so sympathetic.