As last week’s review of Eltractor’s Elradio made clear, a plain-old audio CD doesn’t do this group justice; while it’s an adequate medium for spotlighting the efforts of audio wizards David Michaud and Fabrice Montal, improvisational video artist Boris Firquet is left in the cold. DomUSticks IDEOTRONs attempts to redress that balance, offering four of the group’s audio-visual compositions for computer-based viewing.

This actually works quite well, though it helps to have some experience with CD-ROM-based interactive material, as domUSticks IDEOTRONs lacks a clearly-delineated navigational system; indeed, finding the videos is a challenging pixel-hunt the first time around. The four videos themselves make it worthwhile, yielding more than half an hour of quick-cut imagery and animation, combined with music that has more in common with IDM, and the work of video-improv pioneers like EBN, than with the rest of the OHM/Avatar stable. The images fly past — bats, hummingbirds, cataract surgery, electrical schematics andall sorts of animation, all of them decontextualized and heavily effected. Of the four, the best piece is probably Steno-Bongo, which pairs a vigorous bleep-blip workout with a constantly moving, morphing series of diagrams.

Assuming that you don’t mind using your computer as a source of non-interactive entertainment rather than a work tool, domUSticks IDEOTRONs delivers a pleasingly immersive experience. 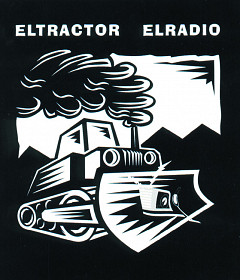