[…] I swung by Tonic and saw Otomo Yoshihide play a turntable-noize set with Martin Tétreault. They sat on stage making a furious din with their mangled Technics decks, while the assembled crowd sat in chairs, watching them quietly and utterly RESPECTFULLY, sometimes speaking to each other in awed hushed tones between sets. That is what unnerves me, I think, about improvised music in that sort of venue, and is why I prefer to get my noise fix from going to Lightning Bolt shows. You’d think with that kind of extremely ugly and powerful music — and I really like a lot of Otomo Yoshihide’s work — you’d be pushed by it into the physical realm, to dance or at least move, but not just sit there. I couldn’t bear sitting down so I stood up, drinking beer and fidgeting while watching them spin warped records, scraping tone arms into grooves under extreme amplification. After the set I went up and looked at their setup; the tone arms had been cut and gouged and taped up with springs hanging out, the 45s used for the performance had titles like ‘Lesson #29’. When I looked at the wrecked decks I couldn’t help but feel like it was a waste to ‘adjust’ a table like that, even for a noise project; I’d been so conditioned by a lifetime of loving record players and fixing broken garage-sale ones to treat them with care and calibrate them precisely, so to see expensive Technics 1200s with their guts hanging out seemed, well, so decadent, and shocked me in a way that seeing a wrecked guitar wouldn’t. (I remember reading an interview with Kraftwerk from the late 70s where they bemoaned people who smashed guitars, talking about how long it had taken them to save for Hohner amps and how they couldn’t comprehend smashing up their own gear.) I think another reason why I feel this way about tables is that in DJing, you’re often interested in smoothness, perfection, a continuous mix, getting things beatmatched exactly. (in other words, a lot of work in an attempt to make everything look effortless!) Even in scratching, perfection is key; there’s good scratching and bad scratching, and in hip-hop you still have to stay within the bounds of rhythm. But seeing the brutalized Technics being forced to vomit up horrible noise made me realize that they’d made the record players their own, that they were, after all, just machines to be used by people, not people to be used by machines, and that the flinching they provoked in me when they smashed an expensive tone arm into a virgin piece of vinyl was perhaps part of the point. 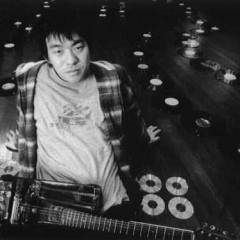 Otomo Yoshihide
… the flinching they provoked in me when they smashed an expensive tone arm into a virgin piece of vinyl was perhaps part of the point.