From the liner notes Forêt profonde is described as an “acoustmatic” melodrama based on Bruno Bettelheim’s essay The Uses of Enchantment. Canadian composer Francis Dhomont has painstakingly assembled this discursive and fantastical work in his private studio in Montréal using [sounds produced in Paris with the GRM] “real-time sound synthesis system.” An acoustmatic melodrama sounds alot like collaged spoken voice recordings of readers and interviewees, some speed-altered, often in multiple languages, offering excerpts of fairy tales or painful personal memoir, with lots ofunsettling electronic paint underneath and in between. The sound treatments, which swim, seethe and melt in unpredictable glisssandi, have an opaque, metallic timbre, somewhat cold, otherly and nauseating, never quite outrightly beautiful, never relaxing into a soothing ambiance. The very disconcerting perspective is as if one were a pyschoanalyst eavesdropping on the irrational dreaming mind of humanity healing itself from a world of private and tribal fears. A headfull for the extremely adventurous. 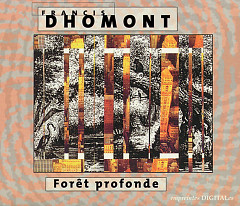 Forêt profonde
A headfull for the extremely adventurous.