The harpsichord has been a part of the contemporary concert scene since the early years of the 20th century and it now boasts a considerable body of literature from our time. Montréal-based vivie’ vinçente has embarked on a project to record “the comprehensive contemporary Canadian and Québécois harpsichord repertoire” of which this two-disc set is a part, containing music by 10 Canadian composers as well as Pierre Schaeffer and Calliope Tsoupaki.

The sound of the harpsichord lends itself to a spare, minimalist style which is shared by many of the pieces on this recording. There is no lack of variety, however. Two of the pieces are written in quarter-tones (especially effectively in Mather’s Saumur), two involve electronics, two involve manipulated recording techniques, and one uses an old tuning system. Most are in a serious, even introspective mode, although Schaeffer’s Bilude humorously mixes a Bach Prelude with musique concrète. All the pieces have in common a desire to explore new sonic possibilities for the harpsichord, a point emphasized by the final track, which consists of seven minutes of silence.

To be successful, this music requires quite a bit of technical and musical control from the performer, and vinçente has both. There is a sureness and inevitability about these performances that gives each peace an all-important feeling of unity.

The studio recording is appropriately close as it captures the varying sounds and resonances of the harpsichord. The presentation is very sparse (the dates of the pieces are not even provided), but this too seems to be in the spirit of the enterprise, which is uncompromising but completely committed. This is not a recording for everyone, but new music aficionados will find here an intriguing survey of contemporary harpsichord techniques. 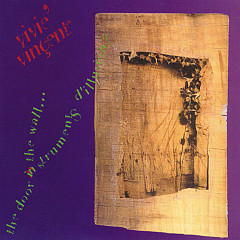 the door in the wall… instrumentS d’illusion?