Walking into L’Envers is like entering a scene from the ’70s East Village. If Patti Smith were on the old couch in the corner talking to the motley assortment of Montréal improvisers, artists, gallerists and dancers typical of a L’Envers audience I wouldn’t bat an eye. This is the newest music venue in the Mile-End and everything from the large photos on the wall—by the very talented Marie-Ève Dompierre — to the warehouse-style windows, the turn-of-the-century wooden support beams, and the homemade feel of the space suggests that this is a space run by artists for artists and audiences alike.

The mastermind behind the scenes is Gordon Allen. An incredible trumpet player and improviser, a talented organizer, a quick-witted schmoozer, an hilarious MC and a big-hearted friend of at least half of the musicians in Montréal, Allen is just what Montréal needs to get its improvised music scene off and running. He’ll emerge from the dense crowd, clad in a porkpie hat and cuffed shirt, beaming at how well the evening is going, how well the musicians are playing, and how many great people have showed up.

Along with three other like-minded musicians, he’s responsible for this new hotspot. Together they’ve worked to create a space committed to presenting music, dance, and performance — “anything that involves improvisation” — that would otherwise have trouble being shown. Their mandate is to offer the excellent musicians of Montréal a comfortable place to play, and to build an audience that comes curious, listens carefully, and leaves satisfied.

But Allen is a far busier man than his carefree, joyous demeanor might suggest. He has been organizing the improvised music community since he arrived in Montréal from Guelph in 2005. The monthly series at Casa Del Popolo “Improvising Montréal” came under his control in 2006; and Mardi Spaghetti, a weekly series he curates along with three other improvisers at Cagibi, is going to celebrate its first anniversary in March.

On Saturday, January 17th, L’Envers opened its new year of programming with a celebration of Art’s Birthday. (It took a couple of weeks for the members of their mailing list to realize that they weren’t talking about a guy named Arthur, but rather celebrating the birth of Art, which Robert Filliou famously starting celebrating in 1963. Check this out.) CKUT was there with their live broadcasting gear. Six bands were slated to play. There was a birthday cake competition and West-Coast artist Glenn Lewis re-enacted the birth of Art.

I arrived just as Gordon took the stage with his trio Pink Saliva, with drummer Michel F Côté and bassist Alexandre St-Onge. Their layered, richly textured mix of acoustic improvisation and electronics sent a hush over the hundred or more gathered. Many took a seat on the floor and listened to the flow of expressive sounds, ranging from beautiful trumpet melody to the harsh but effective noise-electronics of Côté and St-Onge.

Even the loud students next to me stopped talking and I saw their facial expressions change to concentrated curiosity as they craned their necks to see how those three musicians were making such otherworldly sounds.

“When audiences are more attentive,” Gordon had told me earlier in the week, “the musicians have to scrutinize their own work more. Consequently we’re pushed harder to create, and the music advances. I’ve seen that here, and it’s an incredible thing to be a part of. Worth all the work we’ve put into it.” 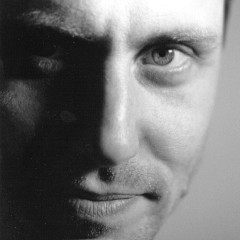 Michel F Côté
Walking into L’Envers is like entering a scene from the ‘70s East Village. If Patti Smith were on the old couch in the corner talking to the motley assortment of Montréal improvisers, artists, gallerists and dancers typical of a L’Envers audience I wouldn’t bat an eye.