Évidence materielle comes in one of the nicest card sleeves I’ve seen in some time, an outer slip sleeve with folded inlays. One inlay holds the CD nestled within the other one, which unfolds to reveal notes for each of the tracks included here in both French and English. There being 5 tracks all over 9 minutes in length, tending towards a 16 minute average — the pieces for the most part being sound works, summing up the artist’s acousmatic journey.

Klang starts with chiming bell tones, a scrape of metal surface. Very tonal sound, but also in its construction playing +ve sound (strike) against -ve (stop). In some ways this becomes more pronounced as it expands into an exploration of chromatic percussion. Hints of electronic click and moment start to creep in, pulsing contrast to what has gone before, taking on a more synthetic form in the process. At times also more clangorous, though returning to chiming with a long exhalation — teasing out conclusion.

With Sorties, voices echo in the gallery space, mixing with the constant motion of visitors. Dull echo of distant voices and struggling children. Clacks build into a more train like sound, the perceived gallery perhaps a large and busy train station. Emphasis changes as we follow our audio narrator — the progress along corridors, through doors and outside. Across gravel and pitter-patter of xylophone accompaniment. Sound disorients so that we have motion that suggests the interior of a car, but environmental impressions of something else. Arriving there is a chapping of a door, back step glance — is anyone home anyway? Chap again and electronic simulation opens the door, creak and the real door opens. Just in time as the rain comes from nowhere and thunder rumbles. Impressions continue, mixing with the hints of electronics and chimes that have an almost background role. The environmental weight of these pieces reminds me of Bexar Bexar, the last composition I heard along the same lines. Concluding in more of a sound extract.

Surface Tension mixes a tumbling, awkward toy sound with an expansive wire swirl and a static glitch field. This allows a simpler construct than the previous piece, a narrower wavelength. But still a kinetic feel that balances in some way definitions of sound and noise. Hints of tones that suggest “music” flit through the back spaces. Again rain is present here, but only a passing in continuation.

Splintering falls somewhere between percussive clacks and the tumbles of Surface Tension. A moment we hear a buzz of bee, reminding of Sorties. Scrape and tumble dominate — feeling more active than Surface Tension in sound forms, but still as contained. Crackle, snackle, fizz, plunge and ongoing tumble. The fire continues its crackle against an electric hum, surprising us with a moment of music snatched from elsewhere. The crackle grows, the wood popping — the fire almost becomes the patter of rain. Though manipulation lies ahead as does reprise.

Blip. Gathering bubble. Plip and ripple. Fluid sounds expand in Streams, their tones offering suggestion of other sounds and perhaps of manipulation. Storm gathers, the windy lash of a jet, the flash of an oar through the choppy sea. Gravel tones lead away, departure. Then reprise the plip, adding gurgle and wallowing in tanks connected through piping. Rushing passage, and again manip. — leading to a crackle, pitter patter on the outside. Sudden over layering — ideas of sound bustling frenetically, then sliding off just as easy. Small sounds, clicks and taps, join to become familiar patterns within the context of this release. 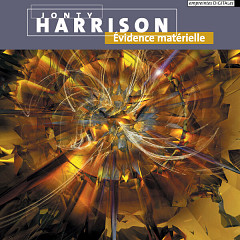