Having produced several instrumental and mixed works, his current endeavors are focused on acousmatic music. More specifically, his compositions employ æsthetic criteria whereby he creates a “cinema for the ear” in which ‘meaning’ as well as ‘sound’ become elements which elaborate his works. Along with concert music he now writes incidental music, especially for the theater. His works are performed and broadcast around the world and have received prizes and mentions in numerous competitions. “Earthlight. One of the strongest images of the achievements we witnessed during the 20th century. These pictures of the earth taken from space will forever stay in our minds.” Normandeau’s Clair de terre is build up with a cinematic structure as the titles of each movement reveals. The two other titles introduces us to Normandeau’s world when he composes for the stage (theater). They are made up of sonic elements he used for music composed for the stage. This is Robert Normandeau’s fourth release on empreintes DIGITALes. 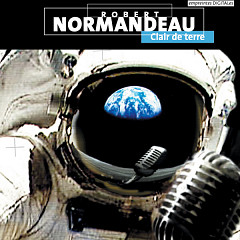