By now I was looking for that first Normandeau CD on Empreintes Digitales, because I remembered it had some great acousmatic piece on it. And I can’t find it — another reason to work on a more serious attempt of putting my CDs in alphabetic order. Over the years Robert Normandeau (1955) has released some more releases, but I always seemed to like the first one best, but it made me also always curious about his new works, which I can’t say for all of the releases on this label. Maybe it’s because there is an element of anarchy in the music of Normandeau, which I like. It appears here in a piece like Jeu de langues, which uses breaths and whispers and sounds like a piece of erotic sound art — a genre that hardly exist (which Normandeau finds odd, since its regular to be found in literature, painting and cinema). It’s easily nicest piece on this CD. Some other pieces, like the title piece and Murmures seem to work within the very strict style of acousmatic music which the label is best known for, but really is not my cup of tea. Anadliad however is piece for two wind instruments and that works really. No rapid glissandi of computer processing but a thoughtful, almost drone like piece of music with some nice storm and thunder sounds. The CD closes with Palindrome which also has a more sustaining sound, almost orchestral in approach I’d say, but with various sound elements dropping in and out, in what seems irregular intervals. All of these pieces are quite long, between ten and fifteen minutes, but certainly the third, fourth and fifth pieces are excellent displays of electronic music, and don’t seem to be too ‘easy’. The other two however seem to do that, a bit too heavily as it is. 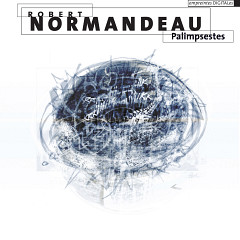 Palimpsestes
… the third, fourth and fifth pieces are excellent displays of electronic music…