It begins with a distant rumbling, like an earthmover firing up its large engines on the other side of the hill, the ground shaking slightly as the pistons start to move. This is Le Chien Borgne’s offering to the first No Type CD. Titled rho < 1 (rho a > rho), it drifts and rumbles, squeaks and threatens to have some rhythm, but never really becomes anything other than an environment. Welcome to the inscrutable sound of No Type.

Founded in October of 1998, No Type was a child of the Internet - its product only available as downloadable MP3 files - and it trafficked in the digital. Over the next half-decade, No Type created a venue for aspiring digital artists to link their sounds and music with an eager digitally-aware audience. They did glitch; they did click ’n cut; they did microwave; they did electroacoustic; they did minimal techno; they did experiments with radio transmissions bounced off satellites; they found more life in the little “1” and “0” than anyone thought there could be. And to celebrate: they’ve gone physical.

Teaming up with DIFFUSION i MéDIA, No Type is now releasing CDs - honest to goodness put it in your car stereo and think your car is about to fall about from the sounds that are coming out of your speakers kind of real discs. They’re starting you off with a two-CD set that encapsulates where No Type has been. Or, more appropriately, what sort of boundaries they don’t bother keeping to.

The Freest of Radicals offers 36 tracks across the two discs and has a little something for everyone. It starts with the beatless atmosphere of Le Chien Borgne, wanders into a chamber where Tomas Jirku demonstrates his minimal techno rhythms for you. Speech.fake explores the realm of micro-tonal glitch with their clinically titled An Objection That is Immaterial After the Fact. Julie Rousse offers a very 4’33" sort of vision with her Une à six idées improvisées. Viratone Ballad breaks in on Eucci with their track , ouet3c-warm, making me think for a minute and 48 seconds that something in either my spleen or my speakers has ruptured. Napalm Jazz and Backstreet Noise deliver two tracks that perfectly fit their names. Oeuf Korreckt finds a way to generate a near pop song from a piece of outdated machinery, further demonstrating that sound and music can be found anywhere. Dick Richards does Berlin style minimal dub though he thoroughly coats his tweaks and notes with yet another layer of water dub before stuttering everything back at you. Chris Degiere demonstrates how random and chaotic generative systems have more appeal than anything found on a recent Autechre album. Speaking of IDM, Headphone Science’s Without Paper Basics is as good as anything off Warp or Rephlex in the last year. Alphacat offers Waveporn which is a soundtrack to a six minute film of modest neu-electro machine dance porn.

And, for the love of static in your speakers, get yourself to their website. There are only 155 minutes of sound on these two discs. Hundreds more minutes await you at notype.com. 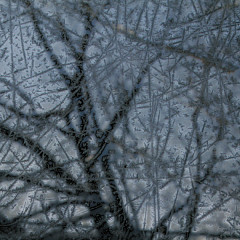 The Freest of Radicals
… a two-CD set that encapsulates where No Type has been. Or… what sort of boundaries they don’t bother keeping to.