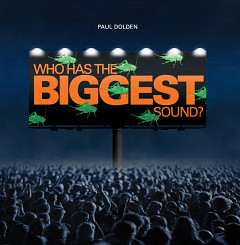 Who Has the Biggest Sound?

For his first new recording in nine years, and 20 years after his breakthrough two-CD set, L’ivresse de la vitesse, which The Wire listed as ‘one of the top 100 recordings of the 20th century’, Montréal-based Paul Dolden reportedly spent 8000 hours in the studio preparing his electroacoustic works Who Has the Biggest Sound? (2005-08) and The Un-Tempered Orchestra (2010) by layering together hundreds of studio hours of live, acoustic recordings, complete with the composer’s own narration at some points. It’s easy enough to throw the resulting 71 minutes into your daily mix at what seems like a reasonable volume level and let it buzz randomly and pleasantly through your daily soundscape. It’s only when you crank up the volume, however, that the impact of Dolden’s conceptual juxtapositioning, combined with the stunning spatial precision of the recording, begins to cook. At times the ideas are so refreshing that they tumble over themselves in almost gleeful haste. And the strong theatrical flow of the 15 tracks of Who Has the Biggest Sound? seem to group themselves into a series of larger episodes — most notably the rambunctious energy of The Saddle Song and My Hound is Out of Harmony, and an absorbing trio of Village Orchestra dance experiments — before concluding inevitably with a track of More Unanswered Questions. For the six tracks of The Un-Tempered Orchestra, despite the occasionally awesome dimensions of its super calliope-sized sound, the nature of Dolden’s philosophical conceit would seem to require close, intimate attention to nuances at those tightly squeezed intersections where space and intonation collide.

Who Has the Biggest Sound?
… the ideas are so refreshing that they tumble over themselves in almost gleeful haste.