morceaux_de_machines means, if i am not mistaken, pieces of machines and is a duo: Aimé Dontigny and Érick d’Orion, who met at a radio station. They played in a band called Napalm Jazz, who release a MP3 work on No Type. Together they are mostly interested in free, improvised music. It seems to me they are using vinyl and tape manipulations, as well as the good ol’ computer treatments. Everything is layered ad infinitum in the computer and mixed at great intensity. Bring on the noise, because that’s what this CD is all about. Noise played at a furious rate, with furious intensity. But unlike the industrialists, their noise is almost free of walls of feedback, but instead there is scraping and scratching of maybe 100s of pieces of vinyl. Maybe my love of noise has vanished over the years, or maybe I’m just getting old, who knows, but to play the entire CD in one run, is getting a bit too much. The CD’s best moments are when they pull back and give air to their lengthy improvisations. A zen like endurance test maybe, but I keep on thinking: ok, heard that, bring on something new. Instead it goes on. 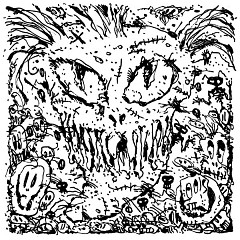