Canada’s Roxanne Turcotte is more terrestrial in remit, turning eye to the turmoil of a human-ravaged planet (the Fukushima disaster among our many accomplishments), reflecting on our mortality and experience of time and taking a political stand in a piece written for Amnesty International — Tout en rouge — sourced from recordings from a 2012 demonstration an subjected to the usual laboratory procedures. If Elizabeth Anderson seats her compositions in the imagination, then Turcotte’s — produced primarily for installation and radio — are from the heart. Given the number of her dedications to the departed — quite powerfully so.

At the outset, Fenêtres intérieures opens the window on a naturalistic world of sound and ‘the passing of time seen from the inside’, revealing the numinous in the normal (birds, skates on ice, tires on tarmac) and the magnificent in the mundane [Which is, I suppose, what lies behind so much of this sort of music.], and to remind us perhaps of how much we habitually ignore as we amble about with our Sony headphones. Turcotte seems less concerned with occupying space than with drawing attention to its presence (or absence) via unassuming portraits of our environment (eg the garden aviary of De la fenêtre) that quietly mutate as they grow in stature, as if poised to shock us with a tap on the shoulder the moment we’re feeling safe.

From an aesthetic point of view I’m less taken with the torrents of (French language) voices that occupy several pieces than I am those consisting of processed, non-human sound per se; particularly those involving musical instruments. OVI (Objet volant identifié) for instance — a pathological study of modified electric guitar (that takes me back to some of the more time-bending instrumental moments on Squarepusher’s mutant jazz Just a Souvenir) — offers welcome respite from the deliberately uneasy cut n’loop vocal antics of Alibi des voltigeurs, and Le piano d’Horowitz manages a similarly deranging feat while almost passing for untreated. At the same time, one finishes listening with the feeling that much has passed the radar undetected. 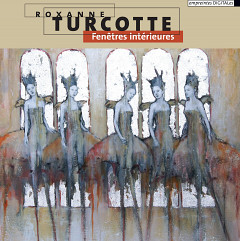