As I see it, electroacoustic music is similar to an experimental techno-orchestra. If Howard Shore had been asked to score films using nothing but electronic means and manipulated “found noises,” this is what the soundtrack to The Lord of the Rings movies might have sounded like. Eerie, primal, instantly recognizable despite their metamorphosis into something digital, each track here is less a song than a work of art. Of course, that leaves each track open to individual interpretation, gripping us all someplace down deep in our ids and straddling us until we’re forced to form an opinion.

Figuring out when each work begins and ends is impossible without constantly checking the “time remaining” feature on your CD player, as almost every composer uses silence as a transition between moods within the same track. Carey Dodge’s “Sound for ‘Emporter du Naufrage’” overlays the noise of a public space with electronic clicks and scratches, and soon the alternating noises become equally annoying until, oddly, neither of them is annoying. This is the motif of the entire album: listened to in the right mood (i.e., when you’re driving along the highway with nothing else to do for two hours) and without expectations, these compositions have the ability to take you out of your conscious mind and revoke the stringencies of time and strangulated thought. Brian Garbet’s “Ritual” opens with a high-pitched techno-shriek, but the effect is less irritating than it is honing, sharpening, head-clearing. Andrew Wedman’s “Breath” creates an aura of ancient reverie through a distorted dirge-like pipe organ, then punctuates the mood with what sounds like tranquilizer darts being shot into a chain-link fence, helicopter blades whipping themselves into an alarm clock frenzy and the strangely compelling rustling of chains. Instead of being bored by what I expected to be a narcissistic indulgence of anti-DJs, I found myself largely displaced and felt oddly freed by the experience. The eleven compositions on Cache 2002 were selected from a bevy of submissions to the Canadian Electroacoustic Community and voted on by a 30-plus member international jury, who auditioned the pieces online and then decided upon the included artists via a series of emails, thus defining the CEC and its work as a true product of the internet age. Interesting, then, that such purely digital “music” could elicit such strong emotional responses from a listener. Perhaps there’s more to this whole world of sound than we jaded rock critics thought after all. 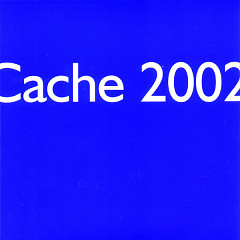