At Holy Trinity Anglican Church on Friday night, New Music Edmonton presented an evening of electronic music by Gilles Gobeil, the award-winning Quebec composer. Joining him on this, the final date of a seven-city Canadian tour, was Suzanne Binet-Audet, who was featured in the program’s first half, playing three pieces, composed by Gobeil, the ondes Martenot.

The ondes Martenot is an electronic instrument invented by French cellist Maurice Martenot in 1928. Martenot made seven sets of the instrument. He made the instruments by hand until 1974; it was this last unit that Binet-Audet brought on tour.

I had never seen an ondes Martenot, so seeing it before the concert started was like a bonus pre-show. The player sits at a small electronic keyboard built on a hand-crafted wood stand that had the clean, unfussy lines of early 20th century modern furniture. The unit is wired to two speakers, one that looks like a traditional floor speaker, and a second one that looks like a hexagonal cabinet. This second unit is called a gong and provides resonance.

The set-up looked compact and quiet, but when Binet-Audet started to play, we were engulfed in a huge, sonic experience. Binet-Audet’s live performance incorporated sounds programmed by Gilles Gobeil, who was at the soundboard throughout the evening. Sound was all around us, emanating from the speakers of the ondes Martenot, as well as speakers set up all around the perimeter of the sanctuary.

The first notes from the ondes Martenot reminded me of many different sounds: a Theramin; a songbird holding a note for too long; music made with air, like an accordion, a saxophone, or human breath. Later, wholly original sounds were interleaved with sounds that recalled running water, rotating metal blades, pumping pistons. These were noises associated boiler rooms, waterworks, light industry and utilities – that is, common settings for film noir and dystopian movies.

In fact, the ondes Martenot has been used in many movie soundtracks. Gobeil describes his own music as “cinema pour l’oreille” (cinema for the ear). We fully entered Gobeil’s cinema pour l’oreille in the second half of the program, when the lights were turned off. We were officially in cinema mode, although there was no projection. The only screen was our imaginations. During a passage that reminded me strongly of airplanes and trains, I reflected on the irony a roomful of people sitting quietly, riveted by the sounds of transportation, but going nowhere, yet feeling transported.

The engagement with the audience after the formal concert was a rare treat, and particularly generous as this performance marked Binet-Audet’s retirement from the stage. Thanks to both Suzanne Binet-Audet and Gilles Gobeil for sharing their artistry and experience. 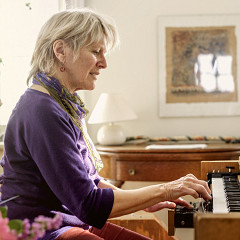