Enigmatic maverick of the harpsichord world Vivienne Spiteri has released Isadora Sings, another CD collection of electroacoustic harpsichord alchemy. One of only a small handful of harpsichordists devoting themselves entirely to the work of living composers, Spiteri (also known by her musical alter ego of vivie’ vinçent) is credited with single-handedly reviving the contemporary harpsichord in her adopted homeland of Canada. “Au diable le conformisme” is an apt byword for her artistic philosophy: for the past 30 years she has resolutely eschewed all traditional expectations of what a harpsichordist should be, throwing off all that she considers as the deadweight of the harpsichord’s heritage as well as questioning the conventions of performance practice: in particular, the adherence to, and reverence for, the written score. Instead she continues to pursue headlong the possibilities for transforming and “extending” harpsichord sound, mainly through combination with live electronics and tape, producing much cutting-edge collaborative work with composers who share her vision, not only of the harpsichord’s predisposition for mechanistic virtuosity, but of how far its relationship with contemporary technology can go.

In order to appreciate the technological diversity as well as the recording quality of this disc, I would urge the use of headphones, not only to allow the listener to enter the different ambient spaces of each sound field, but to engage fully with the immediacy and intimacy of harpsichord sound, whether in its pure acoustical form or in one of the many transformations it undergoes — “deconstructed” harpsichord sound, so to speak. It is not imperative to have technological knowledge to understand the impact of each of the five works on this disc, and from a purely objective and musical standpoint, the compositions speak for themselves. However, the absence of technical information in the CD notes may give rise to questions for the inexperienced electroacoustic listener, and since the intellectual ideas behind the sound engineering and the various recording set-ups are often integral to the work, it is always useful to know how they, and the collaborations, come about.

This is much less of an issue with the first track, Cinéma, mode d’emploi for harpsichord and effects by Pierre Desrochers. The only work on the disc without a “fixed medium” or “tape” part, it is the most musically direct and least complex for the listener, with the “effects” (from sampling and layering) creating sound blocks of rich density and enhancing what is essentially the piece’s minimalist-driven, metrical nature. This is a dramatically propulsive 16- minute ride — still riveting after several playings — by a composer who demonstrates with uncompromising and devastating effect how to capture rhythmic “groove” on the harpsichord, and how to produce pulse and accent through the textural and rhythmic manipulation of layered harpsichord sound.

If the Desrochers piece exploits harpsichord rhythm, then the title track — a collaborative work by Spiteri and composer Kent Olofsson — explores more the nature of its mechanism, with exhaustive treatment of the harpsichord strings through pitch-bending, muting, strumming and manipulation for harmonics. The sense of relish from musicians treading the line between playfulness and seriousness is tangible, but despite — or perhaps because of — the work’s 25-minute duration, some listeners may find less musical cohesion here than in the other works on the disc. Yet, whilst a casual listener may assume it to be a protracted series of randomly unrelated effects, a more searching and patient one (headphones essential) will discover the joyousness of the sound transmutations: the echoing of the harpsichord effects in the electronics and the myriad sonic impressions it generates — among them bells, voices, wind, machinery, knocking and ringing.

Assuming that the title of Isadora’s Box for harpsichord and tape — another collaborative effort, with composer Eleazar Garzón — is an allusion to the mythical unleashing of uncontrolled forces, it captures the notion perfectly. Indeed, the tension between the more structured musical statements in the harpsichord (analogous to the containment of the box?) and the almost breath-taking flight of tape sounds (the dervish-like menace of its contents?) makes for a near-unhinged, giddy listening experience, but one well worth the discovery.

The title of Tangram for bass clarinet, harpsichord and tape by Hope Lee may refer to a Chinese puzzle, but the composer turns the conundrum of this unlikely instrumental pairing completely on its head. The bass clarinet supplies not only the lower registers which the harpsichord lacks, but also provides a foil, with its sift-edged sound, for the immediacy and stridency of harpsichord tone, qualities that Lee modulates to good effect. But whilst there is still the novelty factor in the interaction of these disparate instrumental characters, there is too the tension arising out of the work’s “trio” disposition; the harpsichord and bass clarinet as partners — both of them fitful, whimsical and improvisatory in feel — pitted against the pre-set, fixed dimension of the “third player”.

Jean-Claude Risset’s Pentacle for harpsichord and tape is a five-part work of high energy and calibre but also one which possesses such technical complexity that it is hard to quantify without reference to a programme note. The spatial effect of different channels is evident, and in essence it is a frenetic dialogue between harpsichord and digital sounds — mostly harpsichord-derived — and with each of the five sections stressing an individual construct relating to harpsichord timbre. Least successful of these is the distortion of tuning temperament in the third section — a highly uncomfortable, almost a-musical sound to have to tolerate, but by contrast (and indeed, one of the highlights of the disc), is the work’s dazzling fifth and final section: two minutes of frantic perpetuum mobile in cascading scales with a devastating collective effect of a hall full of amplified harpsichords.

The disc would be a valuable addition to the libraries of electroacoustic music enthusiasts, and I would hope it makes an impact in that area. As for the harpsichordist, I can only speak for myself as someone who witnesses the possibilities of the contemporary harpsichord and the ways in which it continues to excite and inspire major composing talent such as that revealed by the recording. For that reason, I firmly and warmly commend it. The performance and production values are excellent and Vivienne Spiteri’s Hubbard French double after Taskin (1979) sounds with searing clarity. 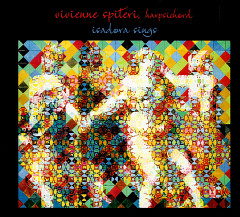 Isadora Sings
… I firmly and warmly commend it.