It has been said over and over again, but it is true that improvisors develop a certain telepathic sense and that the stronger their link the better the music. In this set recorded live at the Casa del Popolo in Montréal (Canada), a_dontigny (aka Aimé Dontigny), one half of noisicians morceaux_de_machines) and Diane Labrosse display an engaging level of unspoken communication. But beyond the thrilling battle between computer and sampler, beyond its doomsday ambient music and menacing digital experiments, Télépathie takes a symbolic value. This is, after all, a first significant bridge (at least on record) to be thrown between two generations of avant-garde artists from two different spheres. A member of the Ambiances Magnétiques collective since the mid-’80s, Labrosse comes from an avant-rock background (she played in the seminal Montréal groups Wondeur Brass and Justine). The young Dontigny has been involved from the start with No Type, one of the first and most important internet-only experimental music labels. The set begins with the rumble of thunderstorm and crackles of electricity. The proceedings remain atmospheric, dragging the listener in rather gently. By the third track photo satellite), things are getting more raucous as weird feedback and outbursts of white noise take more space. média tactique begins with a recording of poet Denis Vanier reading one of the iconic texts of Quebec’s countercultural movement (which includes the line “Kraft fuck the cheese”). The way the two musicians react to the words, developing its sub-text, evokes René Lussier’s Le Trésor de la langue, but only briefly as the piece evolves into a noisy mutated dub. Things almost get out of hand as decibels escalate, but the pair stop in time — or have been stopped, since the abrupt ending screams of editing. Short, to the point and quite convincing. 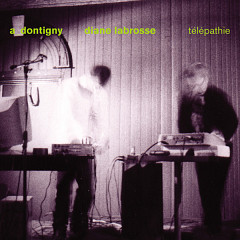