Late last month, the No Type label reappeared following an extended absence with not one but six new releases, the immediate highlight being a tribute to musique concrete figure Francis Dhomont. Also among the releases was a three-track document of a live prepared-CD performance by Ensemble Camp, a group effort led by David Turgeon and also featuring A_dontigny, Érick d’Orion, Christophe Havard and Hughes Germain. While the audio has that distant quality of second — and third — hand sound, the montages that Ensemble Camp produces are probably enabled by the slight echo, which allows the disparate sonic elements, considerable in their range, to overlap and meld. Listen as snapshot vocals collide with dank rhythms, building up to a sudden silence that’s all sudder and awe. The first two tracks deal with elements associated with pop and industrial music, all beats and melodic cues. But the final one, Évocation de la jeune artiste en déesse des apparences, is built almost entirely from string sections of orchestral and chamber CDs, cut’n’pasted into a dense arrangement for an imaginary symphony. 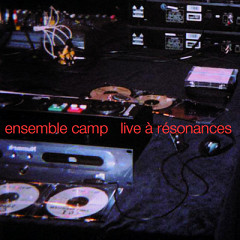 Live à Résonances
Listen as snapshot vocals collide with dank rhythms, building up to a sudden silence that’s all sudder and awe.