Truly phenomenal. Dolden’s compositional technique is to avoid any electronic effects or processing, and to simply record and mix acoustic instruments. However, this recording/mixing employs doubling of tracks over and over until often 400 tracks appear at once. The resulting music is as dense as Penderecki, but with the power of Megadeth. The listener becomes rooted to the spot. Stunningly inventive, Dolden is a major new force, we could not endorse this more fully. 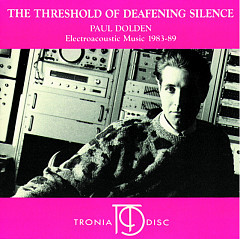 The Threshold of Deafening Silence