With a festival as inherently risk-taking as the Festival international de musique actuelle de Victoriaville (FIMAV), it’s a given that some shows will work better than others. There may also be failed experiments, but it’s to the festival’s credit that it doesn’t rely on the tried-and-true. Invariably, even the less-successful performances are, at the very least, worth checking out.

Day three of the 24th edition of FIMAV was all about operating without a safety net — and, as usual, within a wide array of musical contexts — with some of this year’s most and least successful shows yet. […]

Contrasting with Signal Quintet’s performance, Victoriaville matière was a strong idea on paper that didn’t always succeed in the implementation. The premise was good: construct a forum for a number of composers/sound artists to create individual pieces based on field recordings made around the Victoriaville area. Have the process overseen by renowned experimental blender of natural and industrial sounds, Francisco López, and link the pieces together into a single work with a broader overriding arc. In addition to López, Aimé Dontigny, Louis Dufort, Chantal Dumas, Steve Heimbecker, Mathieu Lévesque, Hélène Prévost and Thomas Phillips all contributed to the 90-minute show.

Similar to the Theresa Transistor performance on Day Two, but in the larger Colisée venue, the artists were placed in the center of the hall, surrounded on all sides by the audience and with a sound system facing in around the periphery of the hall. With the equipment setup on a riser with minimal blue lighting, there was little for the audience to watch, encouraging it, instead, to simply absorb the sounds without visuals and to find meanings on a more personal and imagination-driven level.

The eight pieces were linked by a nature recording of birds, used to allow one artist to leave the center stage so that the next could take his/her place. Other than FIMAV CEO and Artistic Director Michel Levasseur’s usual spoken introduction to the show, there was no applause between pieces, nor was there any announcement of order of events, so it was impossible to know whose pieces belonged to whom.

Intriguing sounds were many and diverse, ranging from the natural to the artificial, and there was considerable processing applied. Like Theresa, equal importance was given to where individual sounds appeared and to how they traveled around the aural landscape. The problem was that, to a large extent, the approaches used were obvious and often overly dramatic. Lacking the nuance of Signal Quintet (and, because these were solitary pieces, the interaction of the earlier performance), the overall levels were high, the sounds often overly dense and the collages often too busy for the listener to sense any sort of unified statement.

Sometimes it’s good to make the audience come to the music rather than the other way around, and a better balance of dynamics and more discernable narrative for each piece would have made the entire show more successful. Still, credit is due for an imaginative experiment that, some shortfalls notwithstanding, was well worth pursuing. 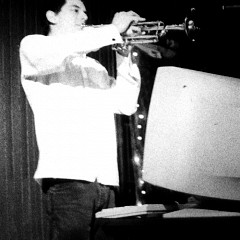 A_dontigny
Intriguing sounds were many and diverse, ranging from the natural to the artificial, and there was considerable processing applied.