MT present themselves (in their bio on the ekumen.com site) as experimentators. Having undergone a major education in electroacoustic composition wasn’t enough, they expanded their terrain into the visual.

Milliseconde topographie is a duo, Nicolas Bernier and Delphine Measroch. They both graduated with Robert Normandeau and have a craving for experimentation. They explore not only the musical domain but also the visual. Bernier has been reviewed before at this site. This DVD-Video is their first and I must say it is quite something.

There are three main sections on the disc, Treelogy, Le microsillon des vagues, Fossile 1, 2 et 3. Each of the pieces in itself consists of 3 parts.

It’s a bit difficult to describe each piece because there are so many aspects to the works. The audio for most part is glitchy, dreamy, electronic. Now and again there is a real instrument applied (like the bandoneon, an organ or dulcimer) but not much more than their acoustic aspects are shown. There is hardly a melody played. Sometimes the music developes a slow rhythm but only to underpin the other sounds.

The visuals are quite diverse but have a lot in common. Often we see photopgraphed objects or landscapes and if what we see is a filmed image the movement is minimal. For instance, She Under a Sherrington Tree which is part of Treelogy, presents a barn with high grass in front of it. The image is in black and white. Only after some time you notice that the grass is moving by the wind. Shortly after that we see a plowed field (also in black and white) with in the distance a row of trees. The trees move by the wind but you only see that in second instance. Often images are layered over one another and then shifted from top to bottom of the screen in different tempos. Treelogy also includes letters, words and sentences placed on the screen fading in and out or digitally scratched in and out of screen.

Absolute highlight, for me, is Le microsillon des vagues which starts with an “amateur” video (black and white, out of focus, no steady image) of a sea shore over which at first letters (flashing very shortly) and then slowly words (somewhat longer) are projected. The footage is then layered and after a while we see silhouet of a man walking along the beach pass by. The screen fades to black and a new scenery is presented. We see a dark and rainly landscape (low point of view) through a sheet of green glass. In the distance vaguely a row of trees is visible and a house and a watchtower. Raindrops move down the glass but also up. Sometimes shortly a part of the screen is lighten (as if some illuminating piece of tape is applied). The music is minimal, with doors opening and closing slowly and the sound of a storm outside. Then starts part 2 (at 2/3 of the work). A piano, organ and a bandoneon and crackling and a softly speaking woman’s voice. A whispering man. To the right of the screen a photograph of a woman (breast and head). In the background the image of a calm sea with birds and two men bathing. The left eye of the woman is a large black hole. MT play with images and abstraction. Words are written over the screen. Patches are covered and uncovered. Etcetera. To me, Le microsillon des vagues is absolutely the best part of the DVD-Video.

Tricycle refers to both triptych and cycle. The three works shown can indeed be very well be watched in a continuous cycle. Images return over more than one work (e.g. the drops of water on glass certain use of lettering) and the visual language is consistent over the three works. It’s midnight music that you watch while reading a boring book or maybe even while dreamsleeping. It has a dreamy atmosphere and you discover more small things while watching it more.

MT present themselves (in their bio on the ekumen.com site) as experimentators. Having undergone a major education in electroacoustic composition wasn’t enough, they expanded their terrain into the visual. They have gone quite a stretch already, but I still think that forte lies in the music. The visual is still their terrain where they are “exploring”. The balance between auditive and visual is sometimes off, and at other times the direct relation between audio and video (e.g. words come up and disappear, accompanied by a specific sound) is unnecessary or even annoying. The use of typography is sometimes pleasant and adds a quality, but at other times it is a nuisance, disturbing the concentration on other aspects of the screen.

The effort that MT makes is quite worthwhile and deserves our continuous attention. 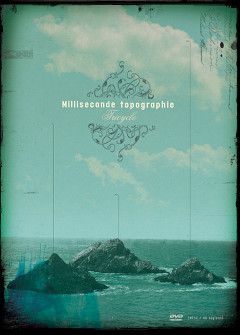 Tricycle
… I must say it is quite something.