Laurie Radford (1958) is a new name to me, but probably just because of my ignorance. Now I get the chance to become acquainted with his sound art on this Audio DVD from empreintes DIGITALes; a label which not only is the foremost label for electroacoustic music, with its own distinct style, but which also is one of the most prolific labels in the genre, with a host of new Audio DVDs and the occasional CD out this winter and spring.

Radford works in a diverse compositional realm, with various combinations of instruments and voices, electroacoustics, and performers interacting with computer-controlled signal processing. He is currently teaching electroacoustic music and composition at London’s City University, UK.

(2002) [5:01]The composer explains that the origin of this brief piece were the reverberant tails of a variety of vocal recordings. The start of the recording, though, to me, resembles a group of Tibetan lures, sounding fervently out of the pre-oppression days of the Potala, through the clear air of the high plateau. Synchronicity has it that I hear these cumulating Tibetan trumpets as I get a email urging me to sign a petition for the Tibetan people and the plight of the Dalai Lama, which I do — giving Laurie Radford’s first piece on the DVD a deeper significance.

Wheezing, appearing and disintegrating sounds move in between the trumpet congestions that hammer gold through the chilly moments of high altitudes. At times I do also recognize the faint connection with words; thus verbs, but that is really very distantly associated. Longer, droning, but sort of slowly swelling sonorities, shape a sonic elasticity beneath the tack-hammering gold trumpets. Original!

The composer explains that the short pieces each are miniature studies of two compositional processes. In each piece Radford explores spatial sound motions within geometrical shapes, which explains the titles. These are also studies of environmental recordings integrated with sounds from the studio. More explicitly, some of the sounds derive from an instrument built by Tom Nunn, called Primordium. These sounds are set up to form relationships with unprocessed takes on a wintry urban streetscape.

As I start to listen I get a sense of reality flushing through a number of quantum dimensions; situations, one after the other, for the current situation, for the swirling pattern of cars and birds and human anatomies down the mystery of space and time and whatever else is deciding our elusive lucidity in the dubious state of matter, which Michio Kaku in his spellbinding scientific TV programs have me marvel at, while I realize that anything that shows up in front of me, from coffee cups to galaxies, are mere patterns in space.

Laurie Radford’s investigations of moving sound placed in geometrical situations further enhances my ever deeper identification with all and ever, in an existence of non-local connections and vibrating patterns that can make sense and no sense of everything.

The sounds in a musical consideration are exciting and beautiful as well. You can listen without getting into philosophy and physics, and evolution is fast and charmingly witty in these flurries of spiraling grains and lofty passages through parks and across pedestrian crossings, as the wind carries children’s voices and spectacular, rustling and punching events are mirrored in mirror turning and tumbling through the void between time and space, between here and now.

Laurie Radford continues his investigations of raw environmentals and studio produced sonorities. Some of the concrete sounds are brought in from a gallery opening in Ljubljana, Slovenia, and from a traditional bell ringing in Bresovica, also in Slovenia. He also brings back some of the electroacoustic sounds from a choice of his own earlier mixed compositions.

This set begins with a truly elegant twitch; a tilted hat over half-hidden, smiling eyes and teeth glaring like white pearls out of the composer’s grin. Coin-twisting sounds at hilarious rotations breeze by and up, out into space, while other sounding motions crash down well within earshot. Lots of patterns exchange information about position, density, inertia and so forth, all inside a realm of style and grace! This is music made from creep-resisting alloy.

Applause splash in like rain, or rain spreads like applause across the bleachers. Sharp, extremely close steel insect sounds move knifing antennae. Eleven dimensions of curly candy sonorities hide behind traditional ways of thinking. Right in a placement of dispersed squirts, people make themselves known through voices. Shadowy realities flutter by in wind instruments and shreds of ambient spaces; quite peculiar — and too much, really, to put your finger on. As soon as you stretch your finger to pinpoint something in this music, something else is there, which might not even be remotely related. This music calls for a kind of up-scaled acceptance that isn’t common. Squirts in buckets — perhaps a cow being milked — is mixed with a child happily and playfully calling Mommy, and spiraling, tight electronic ribbons turn through younger years. A jolly market place accordion is cut up like sound poetry, and you almost feel the wind coming down off the mountain. When the Bresovica bells are introduced, they appear in their afterglow at first, without the attack, folding out beautifully down an artificially extended duration, panning above lumpy, dark sounds of clay clod character — or these clods could be slowed-down echoes of steps through a tunnel. The bell afterglow deepens in the pitches to serious, stern, opaque veils of impermeability, forming deep blue and purple chords, like those steady, long La Monte Young chords from the Dream House on Manhattan “bent out of shape by society’s pliers” into wobbly bands approaching their breaking point. An acceleration and escalation is relieved into a calming, unifying bell chord, and things get more relaxed and unreal, enchanted — lost in a sonic fairytale of magic whistles — which in turn swoop down into a smaller crowd of familiarity; people who talk friendly without tenseness. Time hovers in a rumble, not knowing which way to go.

The composer explains the title: “Cire perdue is a time-honored sculptural technique still in use today. It involves the covering of an initial sculptural model with wax prior to casting the object in bronze. During the casting, the wax melts and disappears, is lost, leaving the finished bronze statue as the final reflection of the artist’s work.”

Radford uses this description as a metaphor for the way he utilizes the source sounds — his own instrumental music — in the piece.

With a candy wrapping paper crackle and a copper insect flyby, the piece opens into a tumbling rumble magnificence, like deep brown chocolate filling through the cracks of the sense of taste. The last and farthest reverberation of a voice aaahs in pannings across the perimeter. Mist hovers across the wetlands, against the bleak light of a promising spring morn. Inside your mind slowed-down rotor blades beat the air. Electronic birds chirp in circular motions while wastepaper oceans heave through the civilizations of this planet, visible in the eight-minute light.

There is a slightly withheld force at play in à la cire perdue, and a tight, elegant kinetic energy; an inkling of much more power in store, the way you feel on your racing bike when you cycle fast and smooth and know that you have much more to give, stored in your amassed training and your muscles and your mental resources.

Distant, panning nightjar prayer beads are thumbed through the obscurity of pine tree hideouts, deep inside the music. An ocean rises inside the sounds as I come to grips with perspectives and realize it might be a closely miked glass of an alcoholic beverage with ice cubes, tilted and twirled in a ring-marked female hand at an upper-class party in Mayfair in 1966, reflecting light blue velvet and golden frames around the walls, Mick Jagger’s dynamic mouth moving about in his face as he bespeaks a young Marianne Faithful…

This is a variation of interferences III (1983-IV), composed by the Canadian-Argentinean alcides lanza. It begins with the distribution of short, rhythmicized portions of sound, which are repeated and developed in an almost shortwave static manner. The sounds which to begin with are gray and bland and anonymous bucket-in-the-shed finds, after a while give way to shreds and recollections of instrumental, almost identifiable sounds from a world that once was called real… Nowadays we know that all we see is just patterns of atoms, which themselves do not really exist either, disappearing into the flux of existence/nonexistence; a bewildering state of vibration — so we’d better just enjoy the music!

Rickety oralities start to emerge like gnats in between sparse but decisive piano tones, panned madly, and a humming machine sits heavily backstage.

A lovely miniature, which the composer has worked hard with. Very nice; a treat!

Laurie Radford explains that this work began as an 8-channel variation and extension of à la cire perdue.

The immediate impression as the music kicks off is that of a flock of jackdaws and crows stirring and flying up, perhaps at the sneaky arrival of a black-and-white cat with sharp claws and supple moves! As the musical motion spirals upwards like a beanstalk in a fairytale, silvery dust falls all around, sonically, each little speck reflecting everything and all. Whistling and chirping trajectories rise and fall, and somewhat denser areas begin to take shape, appearing as thuds or local percussive events. For a while things gear up to an extent that makes analogies to Stockhausen’s Sirius spacecraft viable. This tight-knit motion upwards is brutally cut, as brief silences and choppier sounds tumble in, like rock gardens in an emotional ambience; like cruel recollections when you wake up in your body. Things keep changing too fast to keep up, while associative visions spread out their sheets in the wind before you. The sky is no limit. Angelic choirs soar out all across the horizon in a Gustave Doré setting. Little whirlwind sonorities dance across the West Texan lowlands like Persian Surgery Dervishes while the dead are swept in the color blue. 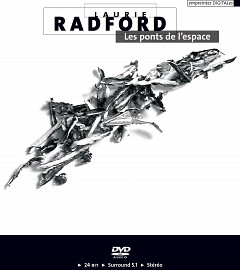 Les ponts de l’espace
Yes, visions supersede each other when you let Laurie Radford’s music take hold, not without pleasure!