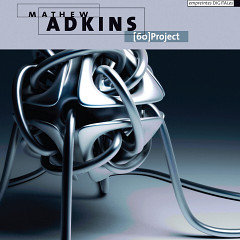 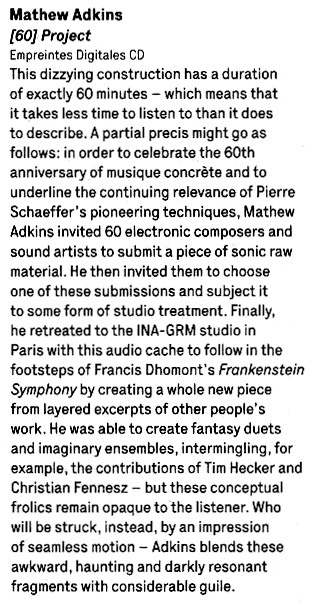 This dizzying construction has a duration of exactly 60 minutes — which means that it takes less time to listen to than it does to describe. A partial precis might g as follows: in order to celebrate the 60th anniversary of musique concrète and to underline the continuing relevance if Pierre Schaeffer’s pioneering techniques, Mathew Adkins invited 60 electronics composers and sound artists to submit a piece of sonic raw material. He then invited them to choose one o these submissions and subject it ti some form of studio treatment. Finally he retreated to the Ina-GRM studio in Paris with this audio cache to follow in the footsteps of Francis Dhomont’s Frankenstein Symphony by creating a whole new piece from layered excerpts of other people’s work. He was able to create fantasy duets and imaginary ensembles, intermingling, for example, the contributions of Tim Hecker and Christian Fennesz — but these conceptual frolics remain opaque to the listener. Who will be struck, instead, by an impression of seamless motion — Adkins blends these awkward, haunting and darkly resonant fragments with considerable guile.