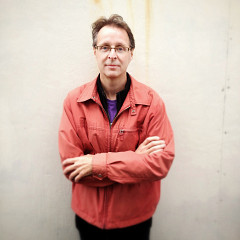 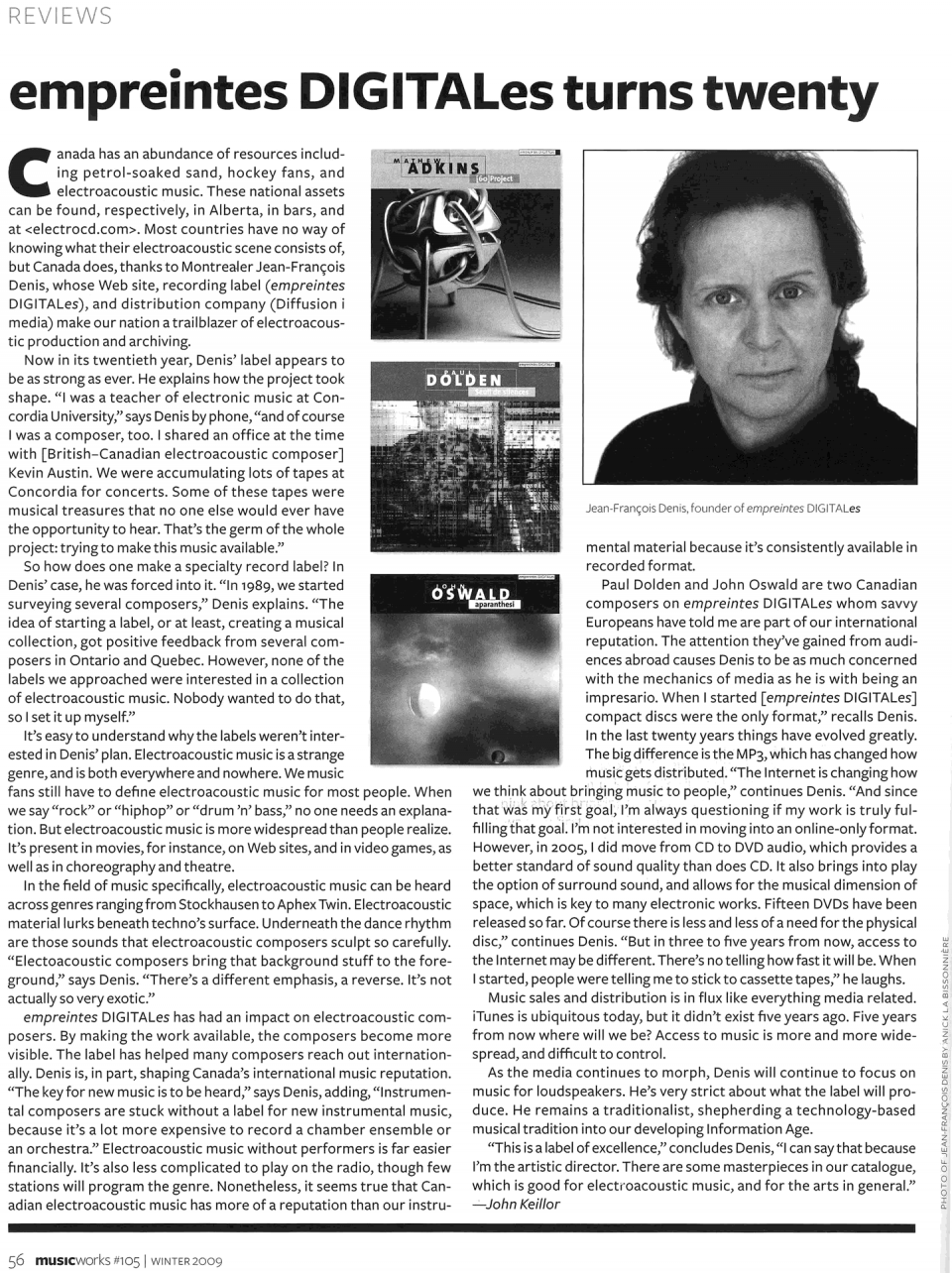 Canada has an abundance of resources including petrol-soaked sand, hockey fans, and electroacoustic music. These national assets can be found, respectively, in Alberta, in bars, and at electrocd.com. Most countries have no way of knowing what their electroacoustic scene consists of, but Canada does, thanks to Montrealer Jean-François Denis, whose web site, recording label (empreintes DIGITALes), and distribution company (Diffusion i média) make our nation a trailblazer of electroacoustic production and archiving.

Now in its twentieth year, Denis’ label appears to be as strong as ever. He explains how the project took shape. “I was a teacher of electronic music at Concordia University,” says Denis by phone, “and of course I was a composer, too. I shared an office at the time with [British–Canadian electroacoustic composer] Kevin Austin. We were accumulating lots of tapes at Concordia for concerts. Some of these tapes were musical treasures that no one else would ever have the opportunity to hear. That’s the germ of the whole project: trying to make this music available.”

So how does one make a specialty record label? In Denis’ case, he was forced into it. “In 1989, we started surveying several composers,” Denis explains. “The idea of starting a label, or at least, creating a musical collection, got positive feedback from several composers in Ontario and Québec. However, none of the labels we approached were interested in a collection of electroacoustic music. Nobody wanted to do that, so I set it up myself.”

It’s easy to understand why the labels weren’t interested in Denis’ plan. Electroacoustic music is a strange genre, and is both everywhere and nowhere. We music fans still have to define electroacoustic music for most people. When we say “rock” or “hiphop” or “drum ’n’ bass,” no one needs an explanation. But electroacoustic music is more widespread than people realize. It’s present in movies, for instance, on web sites, and in video games, as well as in choreography and theatre.

empreintes DIGITALes has had an impact on electroacoustic composers. By making the work available, the composers become more visible. The label has helped many composers reach out internationally. Denis is, in part, shaping Canada’s international music reputation. “The key for new music is to be heard,” says Denis, adding, “Instrumental composers are stuck without a label for new instrumental music, because it’s a lot more expensive to record a chamber ensemble or an orchestra.” Electroacoustic music without performers is far easier financially. It’s also less complicated to play on the radio, though few stations will program the genre. Nonetheless, it seems true that Canadian electroacoustic music has more of a reputation than our instrumental material because it’s consistently available in recorded format.

Paul Dolden and John Oswald are two Canadian composers on empreintes DIGITALes whom savvy Europeans have told me are part of our international reputation. The attention they’ve gained from audiences abroad causes Denis to be as much concerned with the mechanics of media as he is with being an impresario. When I started [empreintes DIGITALes] compact discs were the only format,” recalls Denis. In the last twenty years things have evolved greatly. The big difference is the MP3, which has changed how music gets distributed. “The Internet is changing how we think about bringing music to people,” continues Denis. “And since that was my first goal, I’m always questioning if my work is truly fulfilling that goal. I’m not interested in moving into an online-only format. However, in 2005, I did move from CD to DVD-Audio, which provides a better standard of sound quality than does CD. It also brings into play the option of surround sound, and allows for the musical dimension of space, which is key to many electronic works. Fifteen DVDs have been released so far. Of course there is less and less of a need for the physical disc,” continues Denis. “But in three to five years from now, access to the Internet may be different. There’s no telling how fast it will be. When I started, people were telling me to stick to cassette tapes,” he laughs.

Music sales and distribution is in flux like everything media related. iTunes is ubiquitous today, but it didn’t exist five years ago. Five years from now where will we be? Access to music is more and more widespread, and difficult to control.

As the media continues to morph, Denis will continue to focus on music for loudspeakers. He’s very strict about what the label will produce. He remains a traditionalist, shepherding a technology-based musical tradition into our developing Information Age.

“This is a label of excellence,” concludes Denis, “I can say that because I’m the artistic director. There are some masterpieces in our catalogue, which is good for electroacoustic music, and for the arts in general.”

Jean-François Denis
empreintes DIGITALes has had an impact on electroacoustic composers. […] The label has helped many composers reach out internationally.