Electroacoustic music fans will be thrilled to know that these two new releases featuring the work of Paul Dolden and Roxanne Turcotte are extremely high quality in praduction values, generous in duration, wide-ranging in styles, thought provoking in musicality, and well, just plain great!

As Dolden and Turcotte’s compositional styles are as different, to my ears anyway, as apples and oranges, comparisons cannot really be justified. As the liner notes describe, Dolden’s music is “the missing link between jazz and rock and the high-brow concert tradition” while Turcotte’s musical approach rests on a film-like art of integration.

Paul Dolden’s release contains three works from the composer’s output from the mid to late 1980s and two works from 1996. Most impressive is how Dolden can manipulate a wall of sound to create musical juxtapositions, especially in the opening track, Below the Walls of Jericho (1988-89). My pick, however, has to be The Vertigo of Ritualised Frenzy, Resonance #4 (1996). For tape, with Francois Houle on clarinet and Leslie Wyber on piano, this is a rocking, thumping, virtuosic display of streetsmarts, intellect and psyche. Timeless.

Most of the works featured on Roxanne Turcotte’s CD are more recent. A more introspective nature and thus compositional style is evident here. She also displays a quiet wit in Y---OW (1985, 2002). The telephone and its users play a starring role in this version of a work which the liner notes explain was put together from 22 tapes of the multimedia work of the same name. Turcotte is described also as a sound designer and nowhere is this more evident than in the title track Libellune (1999-2002). A glorious and reflective work for ethnic wind instruments (as performed by Michel Dubeau) and tape, aural imageries are created effortlessly by Turcotte’s exact sense of movement and timing.

But once again, the music is great. Both first-time and seasoned electroacoustic listeners are well advised to check out both discs. 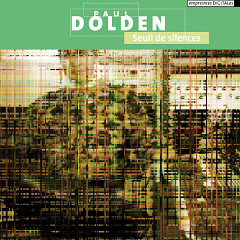 Seuil de silences
Both first-time and seasoned electroacoustic listeners are well advised to check out both discs.