This one is the fruit of a very long friendship. Both gentlemen helped each other out some 28 years ago when they were starting their musical investigations. They took different ways afterwards but stayed in contact. Gobeil found is way in the electroacoustic universum, Lussier started with ‘art-rock’ group Conventum and developped himself to a very unconventional and inventive guitarplayer. Over the years he moved away from rock music and entered the world of improvised music and other contexts. The Canada Council for the Arts brought Gobeil and Lussier together again after so many years. They decided to work on a project inspired on Goethe ’s Faust and to compose an electroacoustic work build “according to the very architecture of the poem”. That was in 1996. In 2003 they finished this project and it was premiered on October 15th. So over a period of 7 years Lussier and Gobeil composed this work at a slow pace by trial and error, permitting themselves all kinds of liberties. Gobeil is responsible for the original idea, research, editing, spatialization, voice, noises, synthesis and sound transformation, travel reminiscences. Lussier signs for editing, guitars, daxophone, voice, noises, sensitive platform, luminous Achille, foot tapping, percussion. Text excerpts are read by Benoit Fauteux and Antonin Billard. Luckily they are not to many of them. The work is divided in 17 parts, each telling a part of the story, albeit not in original order. But because I’m not familiar with the story anyway, this doesn’t really bother me. I feel more attracted to take a good dive into this soundworld, whatever the narrative aspects may tell. They are sounds that can easily be identified, like dogs barking, church bells, cats, doors, etc. But also many sounds that are rendered beyond recognition. It’s hard to decide who is doing what on this CD, apart from the obvious guitar playing by Lussier. Some pieces like Rats et contrat and Le lavoir are dominated by the guitar playing of Lussier and originated from his improvisations I guess. Other pieces start from somewhere else, some soundmanipulation where it is hard to judge whether it is composed or also improvised. Maybe the distionction between improvisation and composition makes no sense here. The story of Faust is abstracted into a complex construct of all kinds of noises and music, that is very well recorded. All sounds are carefully interwoven in a dramatic piece that should interest anyone who is interested in electroacoustic music. 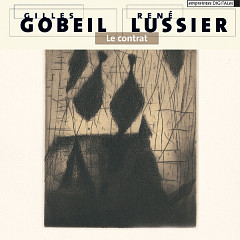