Vues spectrales gathers together three of Denis Smalley’s multichannel works from between 2001 and 2011, converted to stereo. (It also bolts on one older work Vortex from 1982, more about which later on.)

Each of the formerly-multichannel works is a roughly 15-minute, ambience-driven, atmospheric construction that are dominated by great swathes of space and patience. Spectral Lands is, as the title suggests, something of a landscape portrait, with moderately natural-sounding rustlings akin to bird noises and wind through trees, but with more alien and ambiguous sonics grafted in to increase the complexity.

Ringing Down The Sun, by way of contrast, feels somewhat more alien. Low metallic rumbles open, hollow bottle-like distant melodies follow but at such a low level that you suspect you might be imagining them. There’s a tale being told here — not with excessive drama, but with a few more percussive and unexpected twists — and it’s gently sci-fi, but with a dose of introspective sorrow.

Resounding opens with a bell, then silence, before adopting a variety of other quite church-like tones of hammering and reverberation for something which manages to remain ambient and sparse yet have a dose of theatricality about it as well.

The older work Vortex is markedly different. While there are still periods of breathing space, it’s much busier and at times more chaotic, with a decidedly Radiophonic Workshop feel at times, very much reminiscent of the Doctor Who soundtrack work from around or just before 1982 when it was created. It’s curious, but without offering up a strong reason for it having been dug up, or attached to a series of more measured and more recent works with which it arguably doesn’t belong.

As usual, Empreintes Digitales has unearthed some intriguing pieces from the archive, and while there’s no revelations or masterworks in here, it’s certainly a collection of interesting textures. 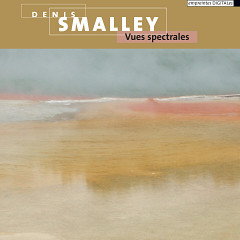