I recently revisited the six albums I have from Gilles Gobeil and for the life of me, couldn’t decide which one to single out for a write-up. I consider all of them excellent with a few of them reaching the “beyond excellence” level for me. So instead of agonizing about it, I decided to spout some words about the three in the “beyond” category.

Gobeil was influenced by (among others) Francis Dhomont and works primarily in the Acousmatic sphere. His music fits the cinéma pour l’oreille (cinema for the ear) genre, a phrase coined by Dhomont which encourages the attentive listener to visualize their own personal virtual environment or mood from the sounds they are hearing, irrespective of the tools and gestures used to create those sounds. Gobeil’s style is instantly recognizable because he frequently revisits sound objects and events that include (and this is not an exhaustive list)… jarringly loud, explosive passages lasting only moments and coming from seemingly out of nowhere, automated heavy machine-like sounds, huge dynamic build-ups providing at times unbearable tension (sometimes without release), sweeping sonic drone vistas that range from the beautiful to the downright sinister and… an occasional element of humor. (Although that last one is few and far between.) Gobeil’s skill at organizing the patchwork of sounds at his disposal is exemplary, making the final result a tactile listening experience that beckons many repeat visits.

Trois songes, the 2008 release is available in stereo and also 5.1 surround. As per empreintes DIGITALes standards, both sound sonically pristine and quite excellent. The surround version is mixed conservatively, i.e. there isn’t a constant swirl of sounds flowing through the room. This subtle use of 5.1 compliments the music perfectly… it’s there at the “right” time, and when it does become noticeable, it adds a very satisfying aural dimension to the music. To be clear, the stereo version sounds phenomenal as well, in fact the rest of these comments will be based on a stereo listening using my preferred earbud rig.

Trois songes stands apart from the rest of his catalog as its much more drone based. For the most part, the three pieces give us more of an introspective, nature based look at the big blue sphere we live on. A look that is untethered from the mechanical automations of everyday urban life.

On Trois songes, Gobeil paints a vast and sweeping portrait of barren, earthly landscapes, rocky vistas, white sands. Places untouched by the trappings of modern living… mostly devoid of life other than the occasional nomadic wanderer. We are witness to the sacred liturgical chanting of now shallow praises from a long forgotten religion. The devout believers confined to a walled garden, crying out to an unhearing demiurge. An earth that time has left behind. A dying earth perhaps?

This celebration of nature’s grandeur is soon disrupted… like a velvet curtain, night falls and Gaia departs, leaving us to grope our way through an alien desert. The crawling, unsightly sound of the Daxophone (a recurring appearance throughout many of Gobeil’s pieces thanks to his association with René Lussier) worms its way into our listening space. An ugly, dying, but at the same time beautiful sound… perhaps giving us a window into our eventual end. All the while, the greater gods churn and seethe above us… uncaring.

Trois songes is an evocatively gorgeous work. A work that beautifully demonstrates Gobeil’s singular style of cinéma pour l’oreille and one that I revisit often. 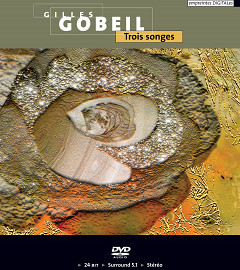