A new Normandeau is always a welcome addition and, Mélancolie delivers in a big way. This, along with Paul Dolden’s Golden Dolden box (write-up coming eventually, hopefully sooner rather than later) provides a splendid end of the year Acousmatic boost.

On Mélancolie, Normandeau humbly underestimates these works by saying; “All the pieces culled on this album were composed in a dome of loudspeakers and are designed to be presented in that format. They are immersive, inviting listeners to dive into the sounds. The stereo versions found on this album are like postcards of the original pieces: they represent something akin to souvenirs of them. I hope to have one day the opportunity to present them to you on the full loudspeaker array. Until then, enjoy.” While I have no doubt how unbelievably cool it would be to hear these on the proverbial DOME O’ SPEAKERS, I have to say they sound stupendous coming out of my bookshelves (at volume) and even more breathtaking through my DAC augmented earbuds. So, until someone hooks me up with my speaker dome, I’m going to have to “settle” the OG way.

The album consists of five lengthy pieces composed between 2013-2021. Since his 2013 release Palimpsestes, Normandeau has refined his style somewhat to incorporate more of a wall of sound’ish drone-like vibe. This “new thing” was (and continues with this latest release) very elegantly layered over with what you might call a more traditional (traditional as it relates to an empreintes DIGITALes “sound”, if such a thing exists) Acousmatic feel. By this, I mean a creative organization of disparate, unidentified sound events into a highly pleasing sonic space with somewhat smooth edges and pristine sound and production.

The first piece, Le ravissement exposes this sound wall in a slow build fashion. The piece is unique in the way that this base drone layer is somewhat down in the mix, immediately throwing me off guard. I would have expected this facet to be much more prominent. Normandeau inverted my expectations by overlaying gorgeously breathy, sporadic bursts of a symphonic nature (maybe strings, maybe not) that are quite loud, powerful, and wildly dramatic. As if this now true “wall of sound” wasn’t enough, he also adds other strange and unnamed sonic samples which ramps up an already chaotic and psychedelic listening experience. I can only describe the result as a sensory stimulation of the highest order.

The next piece, Tunnel azur has the composer channeling a little Gilles Gobeil energy. As the title implies, the listener can’t help but transport themselves to a dark, dank, oppressively confining tunnel inhabited by machines, steam pistons and sinister automatons of all sorts. All working in concert, is this a synthetic leviathan powering unimaginable structures? But to what end? As a warning, this work will stretch your speakers to the limit and is best listened to loud. (Of note, the very rare octobass is in use so… watch out!)

Next, we have Melancholia which has the composer further exploring the creative sound manipulation of the human voice. But wait… I just read the liner notes where I was informed that the only sound source on this piece was the Bandoneon. This demonstrates to me one of the coolest things about listening to Acousmatic music, namely sound sources and physical gestures mean nothing. Once you accept this key concept, the sound world will literally burst wide open and you’ll experience it not just physically, but, if you are committed, with an extreme heightened state of mental / psychic awareness as well. The piece itself expands beautifully starting with a vaguely metallic hum that spectrally morphs into a louder, more majestic and polyphonic layer. Key sound events drop out and what’s left becomes wonderfully sliced and chopped up by some unique studio processing. Overall effect… maximum emotion-infused drama!

On L’engloutissement we get another elevated emotional sound world that transported me to a secluded beach. Dawn light greeted by ocean waves lap at the shore and seagulls cries that are strangely re-worked into something “not of this world” hover over head. Lurking underneath this scene is the sautillé bowing of an orchestra that creates a low pitched, and somewhat menacing hum… occasionally interrupted by moments of electrostatic glitsch. As with all these pieces, experiencing this under Normandeau’s proposed speaker dome can only be stunning (squared!!!).

The final piece on the album is Raíl which pays homage to the train and all sounds that go with it. This is a very powerful work that leads you through a sonic coffee table book of whistles, steam engines, hydraulic brakes, the click-clack of metal wheels on iron tracks, the perception of movement to an outsider and the perception of commuters en route to their destination on the inside. This work brings the album to a close in a fitting whirlwind of industrial chaos.

Mélancolie is a worthy addition to the Normandeau canon and comes highly recommended. Additionally, all attributes of the empreintes DIGITALes label such as sound and production qualities are unsurprisingly firmly intact. 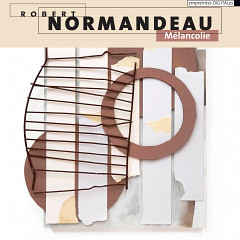 Mélancolie
… the sound world will literally burst wide open […] Mélancolie is a worthy addition to the Normandeau canon and comes highly recommended.