Christian Bouchard’s first full-length solo album as a composer of electroacoustic music is a very convincing debut. Younger than the average age of empreintes DIGITALes’ roster (he joins the label at 35), Bouchard seems to approach the genre from the experimental electronica angle rather than the more traditionally academic angle of musique concrète/sound synthesis; i.e., Bouchard’s music is more concerned with the electrical-sounding sounds (beeps, clicks, hums) at the heart of the works of composers like Carl Michael von Hausswolff, Leif Elggren, or Ryoji Ikeda than the plastic sound-modeling of Francis Dhomont or Jonty Harrison. And so Fractures is not about large gestures of sonic matter, but about cut-ups, interference, and flurries of data. Angle mort is the only piece of long duration. Its title (“Blind Spot”) and a dedication to a “bike-riding friend” announce a reflection on road accidents, but the piece, although emotionally charged, goes beyond the anecdote. But Bouchard’s main strength resides in the miniature. The three other pieces on this disc are all suites of short movements (nothing over four minutes), dynamically segued. Trois miniatures en suite, the oldest work on this set, is a bit stiffer than the other pieces and hardly breaks away from its “work assignment” nature. On the other hand, the two “Parcelles” suites (a total of 12 segments) offer fascinating sonic kaleidoscopes. Bouchard juxtaposes different points of view, different landscapes, different camera angles, so to speak. He is not telling a story, but only encouraging the listener to establish links between segments based on their sole proximity to each other. The hyperactivity of some movements (fast cut-ups, shifts between field recordings of crowded places and pure electronics) is disconcerting at first and makes for a demanding but very entertaining listen. 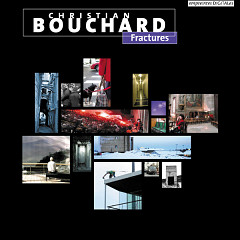