Mitchell Akiyama’s first release under the Désormais moniker, Climate Variations, followed hard on the heels of Fennesz’s Endless Summer, crystallizing the “dronewash glitchscape” sub-genre. Iambroken… is a more extreme exploration of similar territory, attended by glitched-out sonics, incorporating elements of abstract noise haze, guitar shards, massed strings, and rogue drum loops. Abrasive, but with a soft center, spiky, but through a haze, this is a work of radical glitchery, feeding post-rock through digital depredations as Endless Summer did with ’60s guitar-strummy dream pop. From Now On kicks off in bizarre hybrid territory wearing Désormais’ influences - Fennesz, Godspeed You! Black Emperor and MBV - on its sleeve, along with what sounds like a Middle Eastern chamber orchestra tuning up. Then acoustic guitar plays over an ominous build-up of drone textures. On No Mysteries Can Be Tolerated a massive outfolding of plucked strings disappears inside itself, then suddenly all hell breaks loose, drums falling from the skies amid viola entropy. A maelstrom of sawed strings inside a vortex of thrashed skins becomes progressively squeezed and filtered into nothing. On Broken Images and Pockets of Folded Light, a drunken bottleneck guitar weeps, gradually undergirded by a more sober relative. A Moroccan percussion incursion and faux-classical stabs transport the listener elsewhere. Under a Watching Sky does for glitch-guitar what MBV did for indie-thrash, making explicit the theorem of exponential glitch = the new feedback. On To Sing Before Going to Sleep, hugely reverberant and fretboard-squeaking acoustic is effectively milked for its overtones. The off-tune drone unanimity breaks up into skin-pummeling entropy, too grainy to distinguish rhythm and sound, disappearing down-a-tunnel darkly. Lullaby for Those Too Seared to Sleep sees the murk clearing, with a lighter major-after-all-the-minor feel. A terribly hopeful/wonderfully lost finale ebbs as if to nothing, recoups its strength, is dubbed out, then eaten up by electronics. Finally “assembled,” Iambrokenandremadeiambroken… is both a plangent and disquieting experiencing. 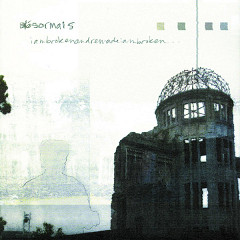 Iambrokenandremadeiambroken…
… both a plangent and disquieting experiencing.